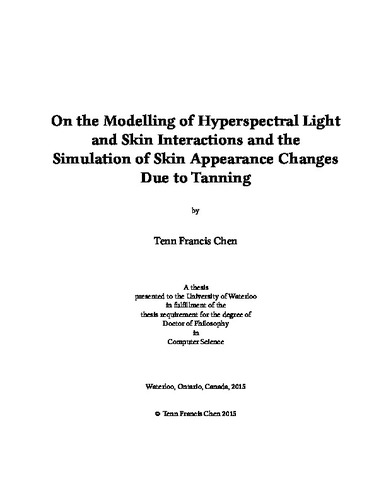 The distinctive visual attributes of human skin are largely determined by its interactions with light across different spectral domains. Accordingly, the modelling of these interactions has been the object of extensive investigations in numerous fields for a diverse range of applications. However, only a relatively small portion of these research efforts has been directed toward the comprehensive simulation of hyperspectral light and skin interactions, as well as the associated temporal changes in skin appearance, which can be caused by a myriad of time-dependent photobiological phenomena. In this thesis, we explore this area of research. Initially, we present the first hyperspectral model designed for the predictive rendering of skin appearance attributes in the ultraviolet, visible and infrared domains. We then describe a novel physiologically-based framework for the simulation and visualization of skin tanning dynamics, arguably the most prominent and persistent of such relevant time-dependent phenomena. The proposed model incorporates the intrinsic bio-optical properties of human skin affecting hyperspectral light transport, including the particle nature and distribution patterns of the main light attenuation agents found within the cutaneous tissues. Accordingly, it accounts for phenomena that significantly affect skin spectral signatures within and outside the visible domain, such as detour and sieve effects, which are overlooked by existing skin appearance models. Using a first principles approach, this model computes the surface and subsurface scattering components of skin reflectance taking into account not only the wavelength and the illumination geometry, but also the positional dependence of the reflected light. Hence, the spectral and spatial distributions of light interacting with human skin can be comprehensively represented in terms of hyperspectral reflectance and scattering distribution functions respectively. The proposed tanning simulation framework incorporates algorithms that explicitly account for the connections between spectrally-dependent light stimuli and time-dependent physiological changes occurring within the cutaneous tissues. For example, it utilizes the above hyperspectral model as a modular component to evaluate the wavelength-dependence of the tanning phenomenon. This enables the effective simulation of the skin's main adaptive mechanisms to ultraviolet radiation as well as its responses to distinct light exposure regimes. We demonstrate the predictive capabilities of this framework through quantitative and qualitative comparisons of simulated data with measurements and experimental observations reported in the scientific literature. We also provide image sequences depicting skin appearance changes elicited by time-dependent variations in skin biophysical parameters. The work presented in this thesis is expected to contribute to advances in realistic image synthesis by increasing the spectral and temporal domains of material appearance modelling, and to provide a testbed for interdisciplinary investigations involving the visualization of skin responses to photoinduced processes.

Tenn Francis Chen (2016). On the Modelling of Hyperspectral Light and Skin Interactions and the Simulation of Skin Appearance Changes Due to Tanning. UWSpace. http://hdl.handle.net/10012/10105