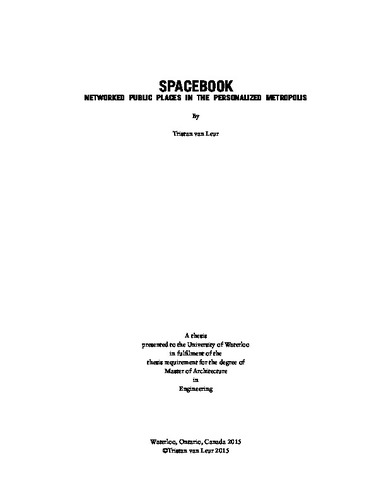 Today’s society is more connected than ever; we have constant access to information, to communication, and to various forms of social media. Ubiquitous mobile computing has significantly changed the public realm in a way that cannot be ignored. Socializing no longer relies on face-to-face interaction, and instead, vast quantities of people’s social lives unfold online via virtual platforms such as Facebook, WeChat, or Instagram. These virtual spaces have joined parks, plazas, and streets as spaces of public communication and interaction. However, these spaces create new questions of privatization and segregation, and may erode the public sphere as much as they extend it. Online discourse can be controlled and customized, allowing citizens to voluntarily segregate themselves with people to whom they are similar. This thesis suggests that physical public space needs to function as spaces that bring people of difference together: a role that is crucial to the health of our multicultural metropolises. Spacebook: Networked Public Places in the Personalized Metropolis embraces information technologies as public resources, and suggests a set of urban public space interventions that use interactive and sentient technologies to locate the network in physical spaces. As an attempt to counteract the segregation and privatization of the public sphere, these new spaces encourage greater user participation and agency in public space. In this research, two components of the public sphere were examined: virtual networks and physical public spaces. Physical public spaces were discovered as having been privatized through a number of policies of ownership and regulation. Virtual social networks were examined at two scales. The first explores these networks at the scale of the individual; in an attempt to understand the spatial implications of social networks, the second part explores the networks at the scale of the metropolis. This research proposes that we have produced a new condition, where the city is augmented and expanded by the individual’s networks, forming a personalized metropolis. Spacebook proposes a set of public spaces, called Networked Public Places (NPPs), which localize the global networks, and turn them into an interactive collective experience. NPPs are a set of interfaces operating at the border between online and physical public spaces. NPPs do not completely transform the public realm, but instead offer provocations for a way that architecture and information technologies can come together to benefit the public sphere. By embracing information as a public resource and asking what should (and can) be shared, Spacebook suggests a beginning of a more participatory and open public realm.