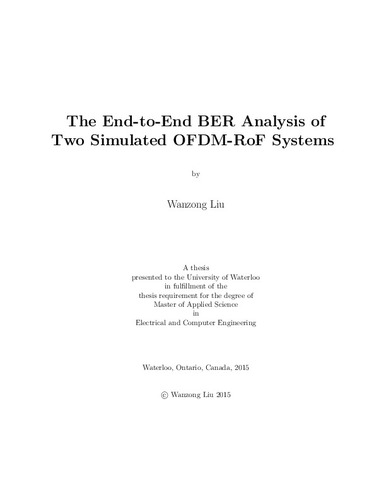 With the rapid grown of informational and visual services, larger capacity and higher-speed transmissions are demanded in today's cellular network, which makes the current wireless networks eventually fail to deal with the growing total traffic. As a result, the way of achieving large capacity and high-speed transmission has undoubtedly been a critical task for the next generation mobile service carriers. Radio-over- fiber (RoF) is one of the promising solutions to the exploding traffic, which can incorporate with Orthogonal Frequency Division Multiplexing (OFDM), namely OFDM-RoF, to resolve the capacity thirsty with relatively lower cost. In this thesis, two OFDM-RoF systems under different transmission schemes are studied regarding their end-to-end bit-error-rate (BER) performances. Particularly, a baseband OFDM-RoF system is simulated and analyzed by Matlab, where the nonlinear effect of the MZM transfer function will be focused in the first system, while the BER performance of the optical transmission line under various laser powers and fiber lengths will be considered in the second. Finally, the BER of the two systems are compared under different M-QAM modulations.