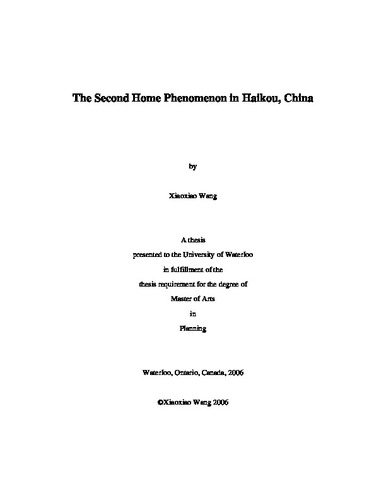 Second home ownership is a new and booming phenomenon in China. Although it has been widely discussed in newspaper, radio and other mass media, it has not raised much academic concern. This study is a preliminary research in this field. <br /><br /> In western counties, second home growth has caused a series of socio-economic impacts to the host community, including housing price inflation, displacement of local people, disruption of local service, etc. These effects identified by western literatures are examined in the context of Haikou, China. <br /><br /> Through applications of interview, on-site observation and secondary research, this study generally confirms the impacts addressed by other second home research. Similar to the western experience, the growth of second homes in Haikou has both positive and negative impacts. On the positive side, the increase of second home purchase contributes to the boom of property-related industry. On the negative side, it causes inflation pressure on housing price and affects the affordability of the housing for local people. The seasonality of second home occupation also leads to a "ghost communit" problem. However, as the development of second homes in Haikou is at an early stage, both their positive and negative impacts are not significant. Some effects such as the displacement of locals, the effects on local retail outlets and services are not detectable. Remarkably, this study addresses two problems that can only be found in China: "college entrance exam immigration" and "illegal sale of <em>hukou</em>". <br /><br /> Based on the major findings, policy recommendations for local government are provided. Implications for conducting research in China, and for future research opportunities are also suggested.