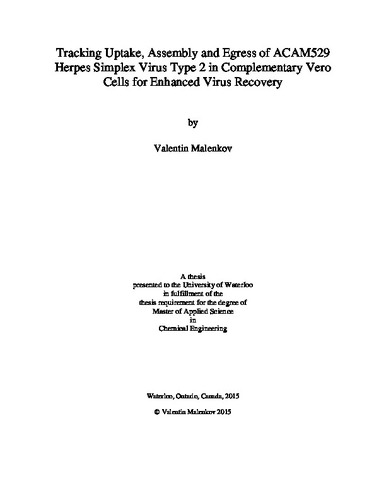 Herpes simplex virus (HSV) type 2 is the cause of one of the most wide-spread human infections in the world, affecting millions of people and circumventing all past attempts to cure or prevent infection. One of the biopharmaceutical companies involved in HSV-2 vaccine development, Sanofi Pasteur, has developed a candidate vaccine based on a live, replication-deficient HSV-2 virus. The “ACAM529” strain is subject to two gene deletions and requires a complementary African Green Monkey Kidney (Vero) cell line (AV529-19) to replicate. A bottleneck exists in the production process which is hypothesized to be the result of virus particles being directed towards both cell-cell and cell-substrate (adherent surface) junctions. The overarching goal of this work was to determine if some mature virus particles localize and egress at substrate surface junctions, becoming inaccessible to traditional extraction methods. To test the hypothesis, an alternate titration method was first developed using induced fluorescence end-point dilution assay with a spectrofluorometer. The second stage of the research involved the use of immunofluorescent staining to locate viral proteins within infected cells in order to inform future process optimization. Mature virus particles were of particular interest and the co-localization of two essential proteins was used to determine their location. A pseudo co-culturing protocol was then developed using cell culture inserts. This system was used in an attempt to determine the extent to which viral budding occurred towards the substrate. The fluorescence which the HSV2012-121 Vero cells displayed on infection with ACAM529 did not allow for effective differentiation between infected and uninfected cells. Treatment of the cells with Sodium Butyrate (2mM NaBu added at the time of seeding) resulted in a 16.93-fold difference between infected and uninfected cells’ fluorescence. Immunofluorescent staining of two virus proteins to determine their co-localization was not successful. Evidence pointed to bleeding of the signals between the 488 and 405nm channels, as well as to a lack of capsid staining in the presence of a tegument of envelope layer. Nevertheless, individual glycoprotein stains were found to be effective and provided good insights into the virus’ behaviour. Lastly, the AV529-19 Vero cells were shown to adhere effectively to insert membranes and form confluent monolayers. Staining and counting of the resulting plaques was used to establish a required initial infection titer between 8.3x104 and 1.2x106 PFU/mL for future cell insert experiments.