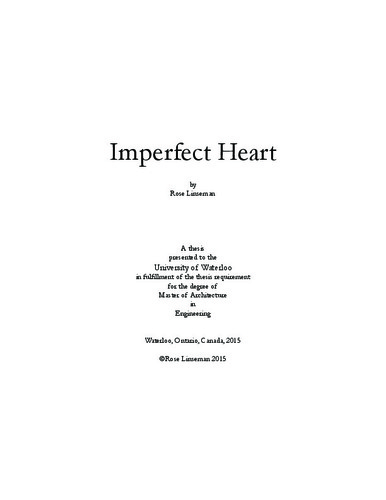 Herein lies a personal inquiry and collection of beautiful ruin in an imperfect architectural world. The journey into abandoned ruin, born out of a curiosity to see what comes of viewing architecture in its darkest hours. This fascination with abandoned architectural spaces brings forth more than a visual sense of decay, it emulates an essence of another world, charged with emotion. This human intrigue, leads to a photographical journey of exploration into ruin from different viewpoints, ultimately focusing on the connection between the individual and home as ruin becomes the symbiotic thread between the two. It is primarily within these photographs that this thesis becomes a personification of the ruined home of an imperfect individual. The personal journey is put forth in three stages. Three books portray different perspectives to exploring ruin, each one delving deeper into an onslaught of ruin in time. The ruin begins by breaking into the world of ruin through views and definitions from the perspective of an outsider in Seeing Ruin (Book 1). The journey into ruin continues in Creating Ruin (Book 2) by an outsider’s contrivance of ruin in an imaginary world of ruin, exploring such themes as age, texture, time and loss. Lastly Living Ruin (Book 3) is explored by an insider, feeling ruin and living within it. This thesis opposes the negative notion of ruin inherent in its dictionary definition. In searching for the light within ruin, this inquiry seeks a place and use for ruin within the world of architecture. This depiction strives to show the beauty of ruin, the light in darkness. It strives for a discussion of a darker side, which is normally withheld amongst its viewers. Creating art and architecture in part from failure imbues the palpable reality of life within the human household. This journey is one view of a time filled with ruin, in one person’s world.