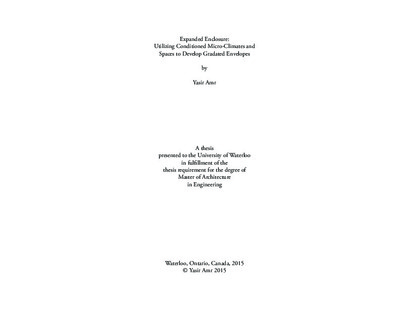 Architecture is more often than not in the habit of creating spaces separated by generally impermeable partitions that give occupants a high level of control - whether it is directed at achieving shelter, privacy, etc.... While this does address basic human needs, it tends to lead to structures with subdivided interiors. Such a system is useful in programs that call for a high degree of control with regards to privacy and climatic control, however in certain programs, this can result in a loss of cohesion in the design as well as a loss of connectivity between key elements and moments in the architecture. Alternatively, some architects have explored the notion of an architecture that is laid out in an open gradated condition as opposed to being defined by strict barriers. Such a proposal opens up the possibility for a program that is transparent and free to fluctuate under certain conditions. Conversely, it loses the privacy and control provided by a typical partitioned and enclosed design. This thesis proposes that architecture does not need to be solely laid out in either subdivided spaces or open gradated ones. Instead it puts forth the possibility that architecture can be enriched by making a careful amalgamation of both autonomous zones that develop key independent moments alongside fluid spaces that lend to the creation of continuous transitions and gradated program. Each system has its merits and disadvantages, and thus each can be carefully applied to programmatic elements that call for one over the other. This provides continual transitions and shifting programmatic potential, simultaneously transforming areas of high control from blocked off rooms to key architectural moments emphasized by a sudden degree of separation in an otherwise fluid system. To help ‘dissolve the wall’ in fluid spaces, the qualities normally hidden in wall space such as systems and insulation are translated into the habitable space by means of microclimatic augmentation. These ideas are further explored vis-a-vis a design proposal of a hypothetical a library based in Amman, Jordan that encompasses both kinds of spaces. Modern library programs extend from traditional book storage to include public activity (such as art galleries and event spaces) as well as elements that require climatic control or privacy (such as rare book rooms and digital media centers). This makes it a suitable program for exploration of both kinds of spatial layouts, and the site’s predictable geo-climatic qualities lend to a greater degree of experimentation in layouts and climatic enhancement of spaces.