On Stability and Stabilization of Hybrid Systems 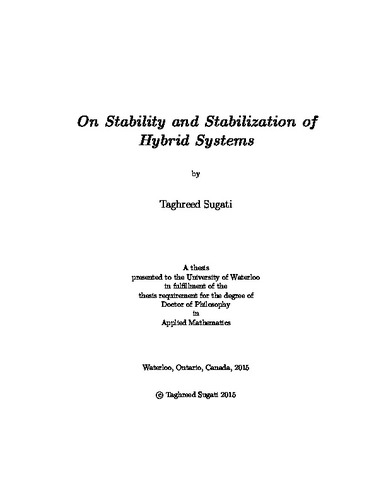 The thesis addresses the stability, input-to-state stability (ISS), and stabilization problems for deterministic and stochastic hybrid systems with and without time delay. The stabilization problem is achieved by reliable, state feedback controllers, i.e., controllers experience possible faulty in actuators and/or sensors. The contribution of this thesis is presented in three main parts. Firstly, a class of switched systems with time-varying norm-bounded parametric uncertainties in the system states and an external time-varying, bounded input is addressed. The problems of ISS and stabilization by a robust reliable $H_{\infty}$ control are established by using multiple Lyapunov function technique along with the average dwell-time approach. Then, these results are further extended to include time delay in the system states, and delay systems subject to impulsive effects. In the latter two results, Razumikhin technique in which Lyapunov function, but not functional, is used to investigate the qualitative properties. Secondly, the problem of designing a decentralized, robust reliable control for deterministic impulsive large-scale systems with admissible uncertainties in the system states to guarantee exponential stability is investigated. Then, reliable observers are also considered to estimate the states of the same system. Furthermore, a time-delayed large-scale impulsive system undergoing stochastic noise is addressed and the problems of stability and stabilization are investigated. The stabilization is achieved by two approaches, namely a set of decentralized reliable controllers, and impulses. Thirdly, a class of switched singularly perturbed systems (or systems with different time scales) is also considered. Due to the dominant behaviour of the slow subsystem, the stabilization of the full system is achieved through the slow subsystem. This approach results in reducing some unnecessary sufficient conditions on the fast subsystem. In fact, the singular system is viewed as a large-scale system that is decomposed into isolated, low order subsystems, slow and fast, and the rest is treated as interconnection. Multiple Lyapunov functions and average dwell-time switching signal approach are used to establish the stability and stabilization. Moreover, switched singularly perturbed systems with time-delay in the slow system are considered.