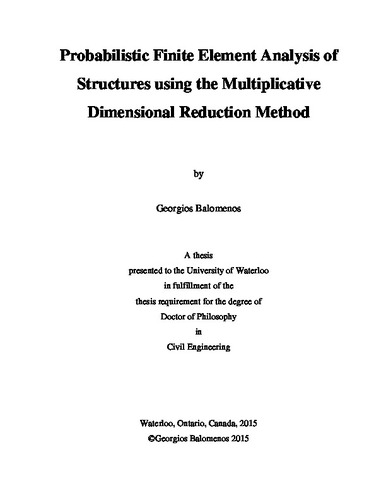 It is widely accepted that uncertainty may be present for many engineering problems, such as in input variables (loading, material properties, etc.), in response variables (displacements, stresses, etc.) and in the relationships between them. Reliability analysis is capable of dealing with all these uncertainties providing the engineers with accurate predictions of the probability of a structure performing adequately during its lifetime. In probabilistic finite element analysis (FEA), approximate methods such as Taylor series methods are used in order to compute the mean and the variance of the response, while the distribution of the response is usually approximated based on the Monte Carlo simulation (MCS) method. This study advances probabilistic FEA by combining it with the multiplicative form of dimensional reduction method (M-DRM). This combination allows fairly accurate estimations of both the statistical moments and the probability distribution of the response of interest. The response probability distribution is obtained using the fractional moments, which are calculated from M-DRM, together with the maximum entropy (MaxEnt) principle. In addition, the global variance-based sensitivity coefficients are also obtained as a by-product of the previous analysis. Therefore, no extra analytical work is required for sensitivity analysis. The proposed approach is integrated with the OpenSees FEA software using Tcl programing and with the ABAQUS FEA software using Python programing. OpenSees is used to analyze structures under seismic loading, where both pushover analysis and dynamic analysis is performed. ABAQUS is used to analyze structures under static loading, where the concrete damage plasticity model is used for the modeling of concrete. Thus, the efficient applicability of the proposed method is illustrated and its numerical accuracy is examined, through several examples of nonlinear FEA of structures. This research shows that the proposed method, which is based on a small number of finite element analyses, is robust, computational effective and easily applicable, providing a feasible alternative for finite element reliability and sensitivity analysis of practical and real life problems. The results of such work have significance in future studies for the estimation of the probability of the response exceeding a safety limit and for establishing safety factors related to acceptable probabilities of structural failures.