An Investigation of the Public Health Informatics Research and Practice in the Past Fifteen Years from 2000 to 2014: A Scoping Review in MEDLINE 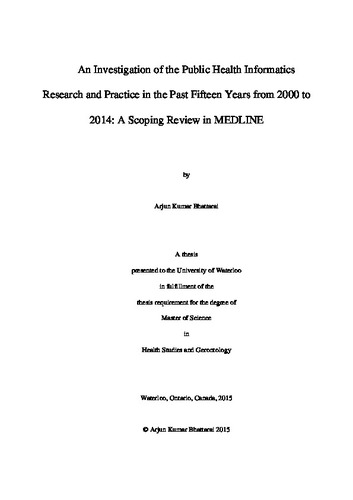 Objective: To examine the extent and nature of existing Public Health Informatics (PHI) studies in the past 15 years on MEDLINE. Methods: This thesis adopted the scientific scoping review methodology recommended by Arksey and O’Malley in 2005. It proceeded with the five main stages, which were: Stage I - identifying the research question; Stage II - identifying relevant studies; Stage III - study selection; Stage IV - charting the data; and Stage V - collating, summarizing, and reporting the results. Each methodological stage was carried out with the joint collaboration with the academic supervisor and a final result and conclusion were set forth. Results: The results of this study captured a total number of 486 articles in MEDLINE focused in PHI. Out of them, a majority belonged to the USA followed by the UK, Australia and Canada. Only about one fifth of the articles were from the rest of the world. Further, About 60% of the articles represented infectious disease monitoring, outbreak detection, and bio-terrorism surveillance. Furthermore, about 10% belonged to chronic disease monitoring; whereas public health policy system and research represented 40% of the total articles. The most frequently used information technology were electronic registry, website, and GIS. In contrast, mass media and mobile phones were among the least used technologies. Conclusion: Despite multiple research and discussions conducted in the past 15 years (starting from 2000), the PHI system requires further improvements in the application of modern PHT such as wireless devices, wearable devices, remote sensors, remote/ cloud computing etc. on various domains of PH, which were scarcely discussed or used in the available literature.

Arjun Kumar Bhattarai (2015). An Investigation of the Public Health Informatics Research and Practice in the Past Fifteen Years from 2000 to 2014: A Scoping Review in MEDLINE. UWSpace. http://hdl.handle.net/10012/10084