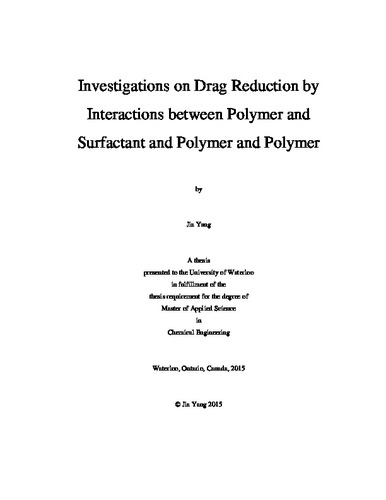 A large amount of studies have been carried out on pipeline flow with several kinds of drag reducing agents, especially polymers and surfactants. Drag reducing agents, by definition, are additives which help suppress or eliminate turbulence in a pipeline. The mechanism and methodology of polymer only or surfactant only as drag reducing additives have been fully discovered. Whether mixed drag reducers such as polymer-surfactant or polymer-polymer systems would be effective is still not clear. In our study, polymer-surfactant and polymer-polymer mixed additives are used in order to explore the synergistic effects and interactions in pipeline flow loops. The experimental work was divided into two sections: bench-scale experiments and pilot-scale experiments. In bench-scale experiments, the properties of prepared fluids such as, surface tension, conductivity and shear viscosity were measured. Several comparison methods and calculations were applied to give better understandings of the properties resulting from mixing of polymer with surfactant and polymer with polymer. After analysis of the properties, several combinations of concentrations were selected and solutions were prepared in the main tank of pilot plant and pumped into the pipeline set-up to test the pipeline flow behaviors. Turbulence structure/Reynolds number, pipe diameter, polymer-surfactant concentration were all considered as influencing factors. Critical micelle concentration, critical aggregation concentration, polymer saturation point, the onset of drag reduction, and the interactions between the mixed additives were discussed. A comparison between pipeline results and the predictions of Blasius Equation or Dodge-Metzner Equation were also discussed.. For polymer-surfactant studies, a commonly used polymer additive – carboxylmethylcellulose (referred to as CMC which is anionic) was selected as the drag reducing agent. The performance of this polymer was investigated in the presence of six surfactants respectively – Alcohol ethoxylate (referred to as Alfonic 1412-9 and Alfonic 1412-3 which are nonionic), Aromox DMC (nonionic surfactant), Stepanol WA-100 and Stepwet DF-95 (which mainly consist sodium lauryl sulfates, anionic surfactant) and Amphosol (which is zwitterionic).The experiments were first conducted with pure CMC solution with different concentrations (100ppm, 500ppm, 700ppm and 1000ppm) as a standard. The 500ppm CMC solution was selected as the best polymer concentration with highest drag reduction efficiency. For polymer-surfactant combinations, CMC-Alfonic 1412-9, CMC-Alfonic1412-3, CMC-Stepanol and CMC-Stepwet systems were found to have significant interactions. High surfactant concentration resulted in reduction in %DR. The addition of Aromox increased the drag reduction ability and onset point when concentration was higher than the polymer saturation points. Also, both hydrophobic and electrostatic interactions were thought to have an effect on critical micelle concentration, which led to the fluctuations in the %DR. For polymer-polymer studies, PAM-PEO system at two different polymer concentrations were investigated. Overall, Pure PAM solution had much higher drag reduction ability than pure PEO solutions. Mixing them together, strong interactions occurred when PEO fraction was high (over 50%) which affected %DR and shear viscosity substantially. Power-law constants n and k were also taken into account and found to exhibit opposite trends with the increase of PEO fraction.

Jia Yang (2015). Investigations on Drag Reduction by Interactions between Polymer and Surfactant and Polymer and Polymer. UWSpace. http://hdl.handle.net/10012/10076