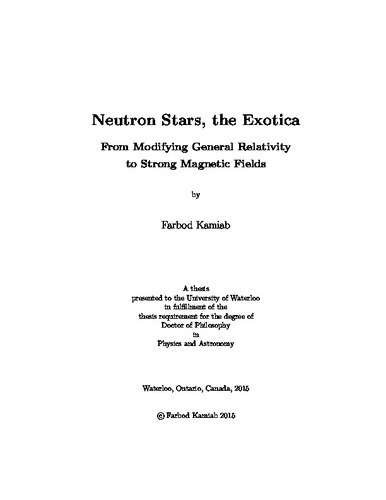 The gravitational aether theory is a modification of General Relativity that decouples vacuum energy from gravity, and thus can potentially address the cosmological constant problem. The classical theory is distinguishable from General Relativity only in the presence of relativistic pressure (or vorticity). Since the interior of neutron stars has high pressure and as their mass and radius can be measured observationally, they are the perfect laboratory for testing the validity of the aether theory. In this thesis, we first solve the hydrostatic equations of stellar structure for the gravitational aether theory and find the predicted mass-radius relation of nonrotating neutron stars using two different realistic proposals for the equation of state of nuclear matter. We find that the maximum neutron-star mass predicted by the aether theory is 12%-16% less than the maximum mass predicted by general relativity assuming these two equations of state. We then study the dynamics of a neutron star in the aether theory and establish that a Cauchy problem can be defined. We derive the dynamical equations, and through analyzing them, we find two modes, one of which is well-posed (expansion of matter in the aether frame) and the other is not well-posed (collapse of matter in the aether frame). Starting from a hydrostatic neutron star configuration that we perturb by adding extrinsic curvature (and radial velocity), we numerically evolve the Einstein field equations for the aether theory in the well-posed mode and find that it evolves towards the not well-posed regime. This feature may pose a serious challenge to our initial value formulation of the aether theory. Whether an alternative formulation can handle the collapsing neutron stars is a question of utmost importance for the viability of the aether theory. It has been clear for some time now that super-critical surface magnetic fields, exceeding 4 × 10^13 G, exist on a subset of neutron stars. These magnetars may harbor interior fields many orders of magnitude larger, potentially reaching equipartition values. However, the impact of these strong fields on stellar structure has been largely ignored, potentially complicating attempts to infer the high density nuclear equation of state. In this thesis, we assess the effect of these strong magnetic fields on the mass-radius relationship of neutron stars. We employ an effective field theory model for the nuclear equation of state that includes the impact of hyperons, anomalous magnetic moments, and the physics of the crust. We consider two magnetic field geometries, bounding the likely magnitude of the impact of magnetic fields: a statistically isotropic, tangled field and a force-free configuration. In both cases even equipartition fields have at most a 30% impact on the maximum mass. However, the direction of the effect of the magnetic field depends on the geometry employed - force-free fields leading to reductions in the maximum neutron star mass and radius while tangled fields increase both - challenging the common intuition in the literature on the impact of magnetic fields.