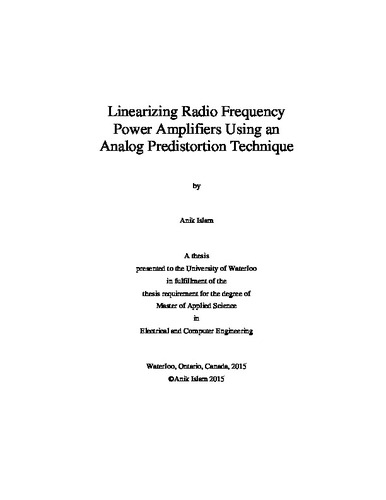 As critical elements of the physical infrastructure that enables ubiquitous wireless connectivity, radio frequency power amplifiers (RFPAs) are constantly pushed to the limits of linear but efficient operation. Digital predistortion, as a means of circumventing the limitations of this inherent linearity – efficiency trade-off, has been a subject of prolific research for well over a decade. However, to support the unrestrained growth of broadband mobile traffic, wireless networks are expected to rely increasingly on heterogeneously-sized small cells which necessitate new predistortion solutions operating at a fraction of the power consumed by digital predistortion approaches. This thesis pertains to an emerging area of research involving analog predistortion (APD) – a promising, low-power alternative to digital predistortion (DPD) for future wireless networks. Specifically, it proposes a mathematical function that can be used by the predistorter to linearize RFPAs. As a preliminary step, the challenges of transitioning from DPD to APD are identified and used to formulate the constraints that APD imposes on the predistorter function. Following an assessment of the mathematical functions commonly used for DPD, and an analysis of the physical mechanisms of RFPA distortion, a new candidate function is proposed. This function is both compatible with and feasible for an APD implementation, and offers competitive performance against more complex predistorter functions (that can only be implemented in DPD). The proposed predistorter function and its associated coefficient identification procedure are experimentally validated by using them to linearize an RFPA stimulated with single-band carrier aggregated signals of progressively wider bandwidths. The solution is then extended to the case of dual-band transmission, and subsequently validated on an RFPA as well. The proposed function is a cascade of a finite impulse response filter and an envelope memory polynomial and has the potential to deliver far better linearization results than what has been demonstrated to date in the APD literature.