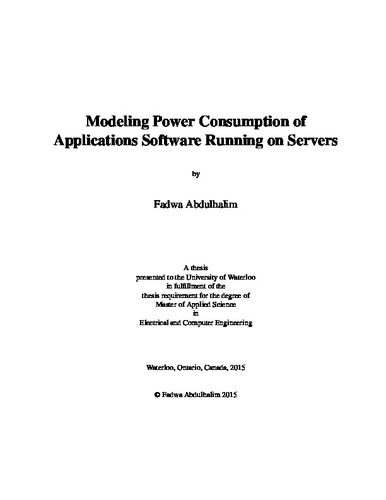 Reducing power consumption in computational processes is important to software devel- opers. Ideally, a tremendous amount of software design efforts goes into considerations that are critical to power efficiencies of computer systems. Sometimes, software is designed by a high-level developer not aware of underlying physical components of the system architecture, which can be exploited. Furthermore, even if a developer is aware, they design software geared towards mass end-user adoption and thus go for cross-compatibility. The challenge for the soft- ware designer is to utilize dynamic hardware adaptations. Dynamic hardware adaptations make it possible to reduce power consumption and overall chip temperature by reducing the amount of available performance. However these adaptations generally rely on input from temperature sensors, and due to thermal inertia in microprocessor packaging, the detection of temperature changes significantly lag the power events that caused them. This work provides energy performance evaluation and power consumption estimation of ap- plications running on a server using performance counters. Counter data of various performance indicators are collected using the CollectD tool. Simultaneously, during the test, a Power Meter (TED5000) is used to monitor the actual power drawn by the computer server. Furthermore, stress tests are performed to examine power fluctuations in response to the performance counts of four hardware subsystems: CPU, memory, disk, and network interface. A neural network model (NNM) and a linear polynomial model (LPM) have been developed based on process count information gathered by CollectD. These two models have been validated by four different scenarios running on three different platforms (three real servers.) Our experimental results show that system power consumption can be estimated with an average mean absolute error (MAE) between 11% to 15% on new system servers. While on old system servers, the average MAE is between 1% to 4%. Also, we find that NNM has better estimation results than the LPM, resulting in 1.5% reduction in MAE of energy estimation when compared to the LPM. The detailed contributions of the thesis are as follows: (i) develop a non-exclusive test bench to measure the power consumption of an application running on a server; (ii) provide a practical approach to extracting system performance counters and simplifying them to get the model pa- rameters; (iii) a modeling procedure is proposed and implemented for predicting the power cost of application software using performance counters. All of our contributions and the proposed procedure have been validated with numerous measurements on a real test bench. The results of this work can be used by application developers to make implementation-level decisions that affect the energy efficiency of software applications.