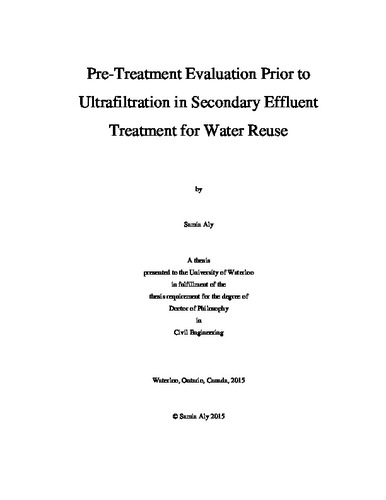 Reusing wastewater can assist in solving water shortage problems, reduce the amount of wastewater discharged to surface water bodies and, by extension, alleviate its adverse effects on humans and the environment. Organics found in wastewater can be removed through biological treatment, however, if secondary effluent is to be reused for potable or some nonpotable applications, some form of advanced treatment is required. Membranes are often used to further treat these effluents for water reuse as they require only a small footprint and can provide a high quality treated water. They are also robust as is relates to dealing with feed waters of varying composition. However, due to the accumulation of rejected contaminants and certain natural organic matter (NOM) constituents on membrane surfaces and within pores, fouling can be an important shortcoming of this technology. Small improvements in the reduction of foulants can translate into substantial improvements in production quantity and cost savings. As such, it is worth the investment of time and research into common pre-treatment methods to identify technologies that can reduce foulant accumulation on membranes. The primary objective of this study was to extend previous research which investigated the use of ultrafiltration (UF) membranes for secondary effluent treatment for water reuse purposes. The most appropriate UF pre-treatment method was identified by comparing three different pre-treatment process modes (biofiltration, in-line coagulation, and a combination of the two processes). In parallel, the primary UF membrane foulant types found in a secondary effluent with high biopolymer content were identified, as well as those removed by the pre-treatment methods used in this research. In this study, aerobic biofilters typically used in drinking water treatment, were investigated for improving the characteristics of Waterloo Wastewater Treatment Plant treated secondary effluent for reuse. Two biofilters, one containing sand and the other containing anthracite, were operated under identical conditions (empty bed contact time [EBCT] of 60 min & hydraulic loading rate [HLR] of 0.75 m/h). Four different coagulants (alum, polyaluminum chloride [PACl], ferric chloride, and ferric sulfate) with a no coagulant control and two different dosages (0.5 and 5.0 mg/L) of each were investigated for their potential to remove UF foulants. To investigate the effect of combining in-line coagulation prior to biofiltration for improving UF performance, one biofilter (containing anthracite media) and one coagulant (1.0 mg/L ferric sulfate) were selected. The organic compound fractions found in secondary effluent, were quantified by Liquid Chromatography-Organic Carbon Detection (LC-OCD) analyses in all water samples before and after each treatment step. Data revealed that both biofilters reduced dissolved organic carbon (DOC), especially the high molecular weight biopolymer fraction, which was reduced by 25-30%. However, the biopolymer concentrations in the biofiltered secondary effluent were somewhat higher than in river and lake water sources, so even with these reductions the biopolymer levels in the effluent of the biofilters were higher than would typically be seen using those sources as biofilter feed. The reduction of organic compounds attributable to biodegradation occurred in the upper layer of the biofilter as confirmed by the highest consumption of dissolved oxygen and biomass concentrations at that location. The higher removals of different DOC fractions achieved by sand appear to be attributable to the increased amount of attached biomass (measured as ATP). Physical properties of secondary effluent were also improved after biofiltration, and turbidity in the effluent of the biofilters did not exceed 1.0 NTU despite influent values ranging from 1.1 to 10.3 NTU. To investigate the impact of pre-treatment methods, UF experiments were conducted with both secondary effluent (as collected from the full-scale plant) and after pre-treatment processes. To assess the development of UF fouling rates, changes in transmembrane pressure through UF runs were monitored and measured every 10 sec. Biofiltration effectively improved the performance of UF by reducing fouling development. The observed reduction in TMP was attributed to the removal of biopolymers (especially the protein component) and turbidity through biofiltration. Under the investigated conditions, sand as a biofilter media performed better than anthracite for reducing UF fouling. When the UF membrane was fed with biofilter effluents, both the reversible and irreversible fouling were correlated with biopolymer concentrations in feed water. Particulate matter was also weakly correlated with reversible fouling. In-line coagulation experiments demonstrated a sustainable reduction in both reversible and irreversible fouling, and coagulant type and dosage had a major impact in improving the performance of UF. Fouling reduction by in-line coagulation was primarily attributed to the alteration of organic composition of secondary effluent and/or the size modification of particles that contributed to membrane pore blocking. The most substantial impact of in-line coagulation was observed for the irreversible fouling reduction, which is more important for sustainable operation of membranes. The higher of the two coagulant dosages tested improved foulant removal and additional reduction of membrane reversible and irreversible fouling rates. Under the conditions investigated, ferric-based coagulants were better for UF fouling control than the aluminum-based coagulants. In-line coagulant provided additional removal of particles and organics through biofilter. In this instance it appears as if the negative surface charge of colloids and organics surface is reduced by charge neutralization resulting in larger compounds being produced and rejected by straining processes through the biofilter. In-line coagulation prior to biofiltration further improved membrane performance by reducing fouling and enhancing the removal of particles and DOC fractions (biopolymer and humic substances) through UF. Biofilter hydraulic performance was relatively unaffected by the upstream addition of coagulant. This study demonstrated that biofiltration and in-line coagulation can, under the investigated conditions, remove some treated wastewater constituents which have been associated with membrane fouling, and negatively affect other advanced treatments for water reuse. The integration of the two pre-treatment processes provided additional fouling reduction and a better UF permeate water was produced than that of the individual pre-treatments.