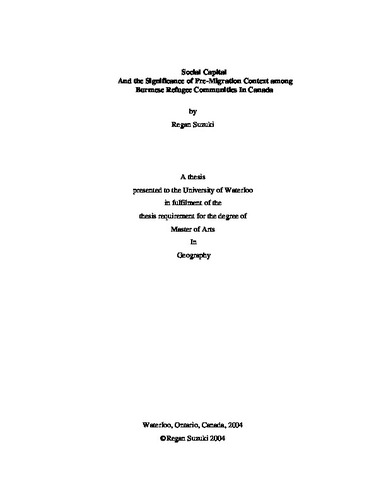 What happens in the case of immigrant groups who have had such pre-migration experiences as to require specialized assistance in the adaptation process, and yet whose population is not substantial enough to convince governmental sources of funding their demands? The wave of Burmese refugees fleeing the 1988 crackdown in their country is one such example. Drawing from perspectives of Participatory Action Research (PAR), this study has several objectives. First, it explores the current settlement needs of the Burmese population by way of relating it to the pre-migration context. By identifying those characteristics which influence the ability of this group to effectively compete for resources among organized ethno-cultural groups in Canada, this study hopes to highlight barriers to full participation. Second, a related objective is the documentation of the settlement and integration issues faced by the Burmese population, namely through an exploratory study of experiences of Burmese communities in Winnipeg and Toronto. Third, it seeks to explore the question of social capital within the Burmese population and its possible implications for resettlement and integration process. Fourth, it will attempt to contribute to the testing of Participatory Action Research as a methodological tool in improving our understanding of refugee resettlement. And fifth, it seeks to generate recommendations that will improve the settlement and integration of this target population within Canadian society. Broadly, it is hoped that this study might demonstrate how the particular needs of immigrant groups, in this case statistically small ethno-cultural groups arriving with traumatic refugee experiences, require careful consideration in seeking to facilitate integration through enhanced social capital and self-help.