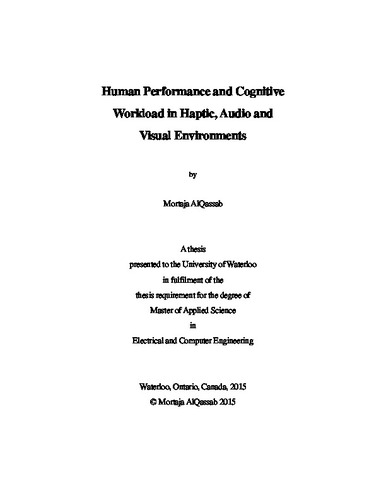 The ability to efficiently perform a task in a human-in-the-loop system and in multi-sensory virtual environments is highly dependent on the type of sensory feedback the operator is receiving and the amount of workload the operator is exposed to. Despite the vast amount of research on Collaborative Virtual Environments (CVEs) and Human Machine Interactions (HMIs), little is known about what type of feedback increases the performance of a human operator and what type of sensory feedback minimizes the amount of workload the operator is exposed to. While individual differences influence human performance outcomes, the physiological processes a human being set the fundamental guidelines for assessing human performance. The purpose of this study is to evaluate the performance of participants for a combination of sensory two feedback modes (audio-visual, haptic-visual or audio-haptic) in a primary task to find the optimum feedback model for CVE and HMI applications. A concurrent secondary task is also designed to evaluate workload of each feedback mode (audio, haptic or visual) and the effect of different levels of workload on task completion time and task accuracy. For example, a car driver performs a primary task by steering the car in the correct direction. A secondary task, in the same context, would be monitoring the fuel level or checking the speed limit. In the primary task, participants are required to press a virtual button from a set of three (right button, left button or up button). The secondary task evaluates the amount of workload the participant is exposed to in three different feedback modes (haptic, audio or visual). Each participant is required to recognize a Morse code. In this study, participants perform three trials. In first trial, participants perform one task the primary task alone. In the second and third trials, participants perform the primary task and the secondary task concurrently. The primary task evaluates human performance and includes combined sensory modalities as a feedback mode (audio-visual, haptic-visual or audio-haptic). The time it takes the participant to press the virtual button (primary task response time), the number of correct button presses (primary task accuracy), the time it takes the participant to recognize the Morse code (secondary task response time) and the number of the correct codes (secondary task accuracy) are all collected. In addition, NASA Task Load Index (TLX) questionnaire is used after each trial to assess the subjective performance and subjective workload of participants. The data collected is tested for normality using Lilliefors test, filtered using Grubb’s test to eliminate outlying data and analyzed using one-way ANOVA and multiple two-sample t-tests. A Tukey HSD is also used to show the differences between experimental conditions. The results of this study indicate that the hypothesis that all combinations of feedback provide the same performance can be rejected for the primary task response time. For instance, the results show that the there is a difference in response time between the audio-haptic and the audio-visual feedback modes in the first, second and third trials. The results of this study also indicate that the hypothesis that all sensory feedback modes provide the same workload can be rejected for the secondary task accuracy. Results show that there is a difference between haptic and auditory conditions and shows that visual condition has a lower accuracy than the other feedback modes.