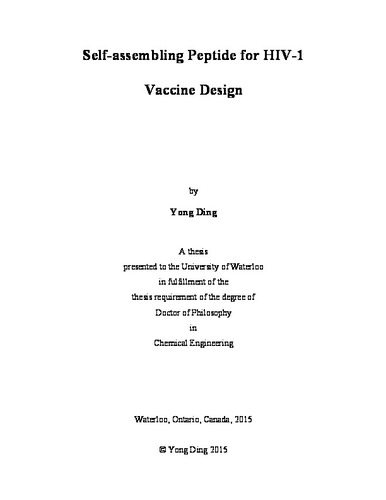 Human immunodeficiency virus-1 (HIV-1) is a worldwide epidemic, which cannot be eliminated by any current therapeutics, even with highly active antiretroviral therapy, which only can control virus replication. A safe and effective vaccine against HIV-1 that can elicit both potent humoral and cellular responses has been considered a best solution to prevent the infection or to reduce the viral load. However, despite the fact that over 250 clinical trials have been conducted based on different concepts, no vaccine has been successfully developed. The extraordinary diversity of HIV-1, the capability of the virus to escape from the adaptive immunity, the difficulty in inducing broadly neutralizing antibodies, and the lack of clear immune correlates of protection represent the major challenges obstructing the development of HIV-1 vaccines. Designing a peptide-based vaccine that stimulates cytotoxic T lymphocytes (CTLs) specifically against the highly conserved epitopes in HIV-1 has been considered a promising strategy. This can provide two theoretical advantages: maximizing the immunological coverage and minimizing the viral escape from recognition of T cells. However, owning to the short sequence (normally 8-10 amino acids for CTL epitopes), these conserved epitopes are weakly immunogenic, requiring potent adjuvants to boost the efficiency. Some novel strategies have been reported to achieve an efficient adjuvant without causing any side effect. Among them, nanoparticle based delivery systems that can provide targeted delivery to immune cells and/or self-adjuvant effect, are emerging as a promising approach. In this thesis, we present a self-assembling peptide based delivery platform efficiently integrating antigenic peptides and immune potentiators in the formulation of a nanoparticle vaccine, and evaluate the immunogenicity in vitro and in vivo. Three parts are involved in this work: (1) feasibility study of the delivery of HIV-1 CTL epitope with the self-assembling peptide EAK16-II (sequence: AEAEAKAKAEAEAKAK) and the cross-presentation efficiency by dendritic cells (DCs); (2) co-delivery of an antigenic peptide and a toll like receptor (TLR) agonist within one nanoparticle to target and maturate DCs, leading to enhanced CTL response; (3) formulating a prophylactic peptide vaccine against HIV-1 by the combination of CD4 epitope-conjugated EAK16-II, CD8 epitope-conjugated EAK16-II, and a TLR agonist R848, which was subsequently assessed the immunogenicity in the transgenic mice. The peptide EAK16-II could self-assemble into nanofibers, which were stable in the acidic environment and in the presence of proteases. We hypothesized that by directly conjugating HIV-1 CD8 epitope with EAK16-II, the fibrillar structures of the conjugate would enhance the stability of epitope and thus improve the immunogenicity. To verify this, the CD8 epitope SL9 was conjugated with EAK16-II to obtain the epitope-loading peptide SL9-EAK16-II. Physicochemical characterizations revealed SL9-EAK16-II spontaneously assembled to short nanofibers in PBS, which were more stable in serum or oligopeptidase than unstructured SL9. Ex-vivo generated DCs that were pulsed with SL9-EAK16-II and activated by maturation cytokines, stimulated more poly-functional CD8+ T cells. This augment was explained by the evidence that SL9-EAK16-II was degraded more slowly than SL9 within DCs, therefore prolonging the stimulation to CD8 T cells. Moreover, the results from confocal microscopy suggested the cytosolic pathway for the cross-presentation of SL9-EAK16-II. However, SL9-EAK16-II itself failed to maturate DCs after internalization, which might cause antigen tolerance. To avoid the induction of tolerance and further enhance the antigenicity of epitope SL9, TLR agonist R837 or R848 was incorporated into the nanofiber formulation. The data from fluorescence spectra and calorimetric titration suggested the co-assembly between SL9-loaded nanofibers and TLR agonist was mainly driven by hydrogen bonding and hydrophobic interactions. The SL9-EAK16-II/R848 co-assemblies strongly facilitated the activation of DCs, and stimulated significantly more epitope specific CTLs when assessed in the form of DC based vaccine. The in vitro studies implied the potential of the self-assembling peptide EAK16-II as a nanocarrier in the formulation of vaccine. We further determined the applicability of this formulation in vivo. Since the activation of CD4+T cells plays a critical role in the generation of functional memory CTLs, we incorporated an additional CD4 epitope TL13 into the vaccine formulation, via conjugating with EAK16-II. The new formulation of antigen was characterized as nanofibers with average size of approximately 220 nm. The transgenic mice that were subcutaneously injected with these nanofibers produced as much as 1 fold increase in frequencies of SL9 specific CTLs, when compared with the mice vaccinated with either the mixture of epitopes and R848, or R848 alone. Moreover, almost 90% of the SL9 specific CTLs primed by the nanofibers were central memory CD8+ T cells (CD44+, CD62L+), which was the hallmark of the acquired immune response. The in-vivo study suggested not only enhanced magnitude, but also higher quality of T cell response was induced by the nanoparticle-based vaccine. Our findings demonstrated the self-assembling peptide had considerable promise as a delivery platform to integrate the principal components for cellular response-focusing vaccines.