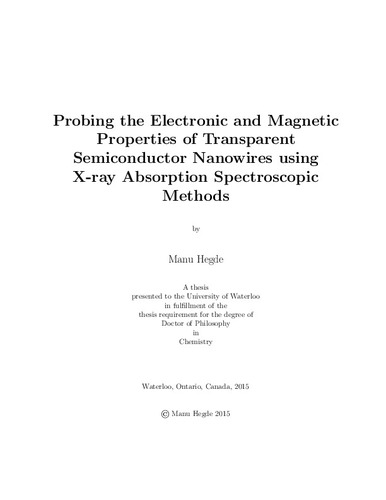 Control of electron spins in individual magnetically doped semiconductor nanostructures has considerable potential for quantum information processing and storage. The manipulations of dilute magnetic interactions have largely been restricted to low temperatures, limiting their potential technological applications. Among the systems predicted to be ferromagnetic above room temperature, Mn-doped GaN has attracted particular attention, due to its attractive optical and electrical properties. However, the experimental data have been inconsistent, and the origin of the magnetic interactions remains unclear. Furthermore, there has been no demonstration of tuning the dopant exchange interactions within a single nanostructure, which is necessary for the design of nanoscale spin-electronic (spintronic) devices.\par This work demonstrates for the first time intrinsic magnetization of manganese dopants in individual gallium nitride nanowires (NWs) at room temperature, which were synthesised using the chemical vapor deposition method. The results of single nanowire XANES studies using scanning transmission X-ray microscopy along with atomic multiplet calculations confirm that Mn adopts tetrahedral coordination in GaN nanowires and has mixed oxidation state (\ch{Mn^{2+}}/\ch{Mn^{3+}}), with \ch{Mn^{2+}} being in relative majority. Using high-resolution circularly polarized X-ray microscopy imaging, the dependence of the manganese exchange interactions on the NW orientation with respect to the external magnetic field was studied. This study also focused on the importance of X-ray studies on individual nanowires, as in ensemble measurements contribution come from the co-deposition of Mn secondary phases alongside nanowires. This was further confirmed by bulk magnetization measurements, which has shown only residual magnetization. Single nanowire X-ray magnetic circular dichroism indicates intrinsic magnetic ordering of Mn dopants at \SI{300}{\kelvin}. The crystalline anisotropy allows for the control of dilute magnetization in a single NW and the application of bottom-up approaches, such as \textit{in situ} nanowire growth control or targeted positioning of individual NWs, for the design of energy efficient spin-electronic devices.\par The second part of the thesis focuses on the growth mechanism and origin of orbital anisotropy in $\beta$-\ch{Ga2O3} nanowires. Gallium oxide nanostructures with high aspect ratio and variable faceting were synthesized by the chemical vapor deposition method via vapor–solid growth mechanism. Systematic investigation of the growth conditions revealed that the nanowires can be produced under the conditions of high temperature and low precursor flow. The nanowires crystalize as the $\beta$-phase \ch{Ga2O3}, which has the monoclinic crystal structure. Preferred growth was along the [010] direction, as corroborated with lattice-resolved imaging and crystal plane models. The high degree of faceting is discussed in terms of the evolution of the nanowire cross-section morphology, based on the growth rate of the facet boundaries relative to the nanowire surface planes.\par The origin of anisotropy at the molecular and electronic structure levels in individual $\beta$-\ch{Ga2O3} nanowires grown along the crystallographic $b$ direction was studied using linearly polarized X-ray absorption imaging at both gallium L$_3$ and oxygen K edges. The O K-edge spectrum shows significant linear dichroism for the electric field vector of the X-rays oriented parallel and perpendicular to the nanowire long axis. The contributions from the three nonequivalent oxygen sites to the observed spectral anisotropy were elucidated using FDMNES calculations in the framework of the multiple scattering theory. The role of relevant O and Ga orbitals in the linearly polarized O K-edge absorption was determined based on the point group symmetry arguments. The results of this work suggest mixed covalent and ionic character of the Ga-O bond in individual nanowires, with the dominant contribution of O 2\textit{p}$_z$ orbitals to the absorption spectrum for the electric field vector oriented perpendicular, and O 2\textit{p}$_{x,y}$ orbitals for the electric field vector oriented parallel to the nanowire long axis. Gallium 4\textit{p} and \textit{d} orbitals were found to contribute mostly to the antibonding states. These results improve the understanding of the origin of anisotropy in complex transparent metal oxide nanostructures, and could lead to the prediction of physical properties for different nanowire growth directions.\par The understanding of growth mechanism, dopant distribution and electronic origin of crystalline anisotropy within individual semiconductor nanowires is of fundamental importance. It is these structural parameters can dramatically change electronic, magnetic, and optoelectronic properties of the nanowires, and could be building blocks for the future nanodevices.