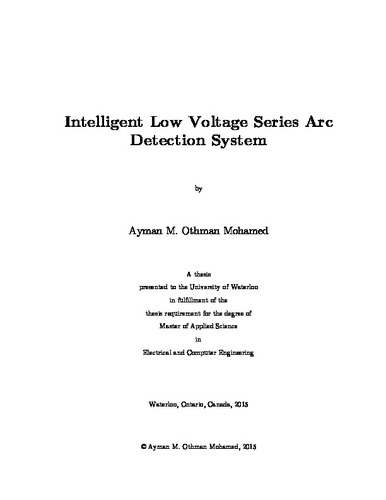 Protection from electric power hazardous has been used ever since applications of electricity were discovered. Hazards in the electric system can be in the form of over voltage or over current leading to catastrophic system and equipment failure, resulting in physical damage or even to human fatalities. Electrical protection is achieved by installing protection devices throughout distribution system to isolate faulty branches and mitigate fault development. Fire is a principal cause of buildings damages and related personal injuries. A major contributor to buildings’ fire originates from electrical arc faults caused by electric distribution equipment and appliances failures. To remedy this problem, regulatory bodies required electric arc faults protection. Over the years this requirement was enforced by different electric codes and expanded to cover most of residential building areas and all living spaces. Arc fault circuit interrupters (AFCI) are devised to complement existing protection methodologies and devices, focusing on electric arc detection and preventions of subsequent risks, mainly fire ignition. Circuit interruption occurs whenever characteristics of arc failure is detected, either from current, voltage or electromagnetic radiation. Detecting the arc faults, and hence increasing the reliability of interruption, is a challenge, given that some household appliances produce arc-like behaviors in normal operating conditions, like electronic light dimmers and solid state controlled variable speed drives. This research focuses on developing an intelligent low voltage series arcing detection scheme based on pattern recognition, with immunity to false tripping. This point is the main drawback of most published work and issued patents on arc detection to date, mainly due to the difficulty of modelling such a transient behavior, especially on low current arc cases. Real data is generated in lab simulating series arc conditions at different combinations of linear and non-linear loads. Appliances current are recorded as well. Two disjoint datasets are used for training and testing of the proposed system with no components shared between the two datasets to verify classifier generality. The proposed pattern recognition method proved to be highly immune to false tripping in line with benchmark regulatory standard, and can be adapted to similar hard to model non-stationary problems.