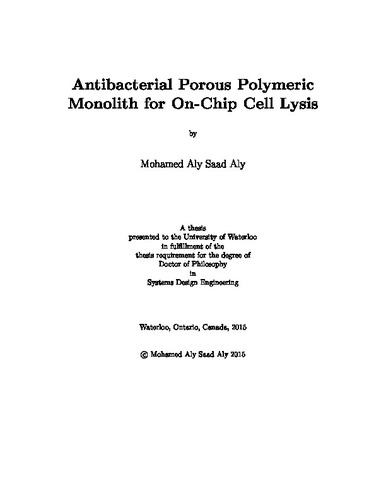 The application of porous polymeric monolith (PPM) column as an e effective tool for bacterial cell lysis is demonstrated in this thesis. By exploiting the expansive surface area and controllable pore size inalienable to PPM, a double mechanism cell lysis technique was developed. The bacterial cell wall is mechanically sheared (mechanical-shear lysis) by flowing through the narrow porous medium of the PPM column, but it is also damaged and disintegrated by physical contact (contact-killing lysis) with the antibacterial polymeric biocide covering the porous surface. This leads to leakage of the intracellular contents. The antibacterial monolithic columns possess the aptitude to constrain the growth, kill and e efficiently lyse gram-negative and gram-positive bacterial cells. The developed antibacterial PPM columns can be potentially used in developing commercial macro-columns for cell lysis like the columns commercially available for DNA isolation. Also, they can be used within microfluidic channels for on-chip cell lysis at the heart of integrated sample preparation device. The developed cell lysis technique eff efficiently lysed numerous gram-negative and gram-positive bacterial species with no chemical or enzymatic reagents utilized, power consumption required, complicated design and fabrication processes. Also, the cell lysate containing the DNA released from bacterial cells after lysing with the developed antibacterial PPM columns is ready to be used by PCR with no further purification needed. Amplified DNA genes were detected by gel electrophoresis starting from small volume and cells concentration down to 10^2 CFU/ml. This makes it an attractive on-chip lysis device that can be used in sample preparation for bio-genetics and point-of-care diagnostics. The PPM columns were formed by photo-initiated free radical copolymerization of functional and cross-linker monomers with the assistance of porogenic solvents and photo-initiator. The porous network was synthesized directly inside a microfluidic channel fabricated in a cross-linked poly(methyl methacrylate) (X-PMMA) substrate by well-controlled, high-throughput, and time and cost e effective laser micromachining. The unreacted double bonds at the surface of X-PMMA provide covalent bonding for the formation of the monolith, thus contributing to the mechanical stability of the PPM within the microchannel and eliminating the need for surface treatment. Two functional monomers belong to two different antibacterial polymers families have been used to form two antibacterial PPM columns. A functional monomer, N-(tert-butyloxycarbonyl)aminoethyl methacrylate, belongs to SMAMPs antibacterial polymer family was used to form antibacterial PPM column, SMAMPs-PPM. To demonstrate that cells were lysed via a dual mechanism, the active (functional) monomer, N-(tert-butyloxycarbonyl)aminoethyl methacrylate (Boc-AEMA), was protected by a Boc group to first demonstrate mechanical shearing lysis alone. Once the protecting group was removed the PPM became antibacterial, leading to improved performance. Both lysis mechanisms were thus validated. Furthermore, the lysis efficiency of the PPM was improved by tuning their hydrophobic-hydrophilic balance and determining the optimal flow rate, at which the bacterial cell walls were sufficiently mechanically sheared through the porous medium of the column to disrupt the cell membrane by physical contact with the antibacterial polymeric biocide covering the pore surface. To further con rm and validate the dual lysis mechanism with different monomer, an antibacterial PPM, DADMAC-PPM, from a functional monomer that is one of quaternary ammonium compounds, diallyldimethylammonium chloride (DAMMAC), which is intrinsically cationic and antibacterial, was developed. Also the e effect of the cross-linking monomer on bacterial growth inhibition, lysis efficiency and the mechanical stability of the PPM column within the microfluidic channel, using three different cross-linking monomers was studied. Moreover, the bonding e efficiency between two layers of X-PMMA substrate at different cross-linker contents was studied. Furthermore, the reusability of the QAC-PPM was investigated and compared with the previously developed SMAMPs-PPM. The cell lysis e efficiency of the biochips were characterized by qualitatively (semi-quantitatively) detecting DNA and quantitatively determining DNA concentration in the crude lysate collected at the outlet of the biochip. By using fluorometry, the ethidium bromide (EtBr) intercalation assay was utilized as an indicator of the presence of DNA in the cell lysate and the DNA concentration was determined by UV-Vis spectrophotometry. Furthermore, lysis was con rmed by o -chip PCR that was further analyzed by gel electrophoresis. The antibacterial PPM columns were reused for 20-30 lysis cycles without any evidence of physical damage to the monolith, significant performance degradation or DNA carryover when they were back-flushed between cycles.