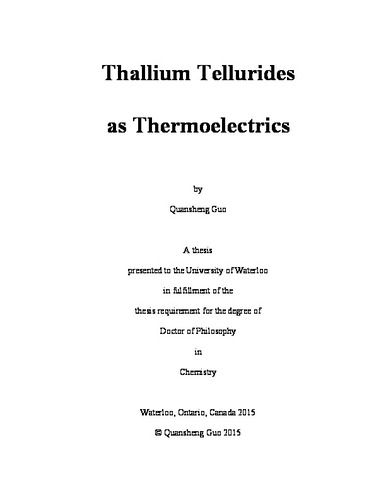 Noting the steadily worsening problem of depleted fossil fuel sources, alternate energy sources become increasingly important, such as thermoelectrics that may use waste heat to generate electricity. To be economically viable, the thermoelectric figure-of-merit, zT, – related to the energy conversion efficiency – needs to be in excess of unity (zT > 1). Modifications of Tl5Te3 show great promise as thermoelectrics due to their intrinsically low thermal conductivity. Herein thallium lanthanide tellurides Tl9LnTe6 (Ln = La, Ce, Pr, Nd, Sm, Gd, Tb) have been prepared and their high temperature electrical and thermal transport properties investigated. Single phase samples were obtained. The electrical conductivity and thermal conductivity increased across the lanthanide series from La to Tb. On the other hand, the Seebeck coefficient values decreased with Ln varying from La to Tb. Tl9SmTe6 or Tl9GdTe6 constituted an exception, as the Seebeck coefficient of Tl9SmTe6 was smaller than that of Tl9GdTe6. Tl9LaTe6 had the largest figure-of-merit zT = 0.51 at 550 K. Thereafter, Tl10–xLaxTe6 samples were prepared with x = 0.90, 0.95, 1.00, 1.05, 1.10, aiming toward higher zT through composition optimization and expanding of the measurement temperature range. With the increasing La content, the unit cell volume increased, while the electrical conductivity, thermal conductivity and lattice thermal conductivity decreased. An opposite trend between Seebeck coefficient and electrical conductivity was observed. The highest zT = 0.57 was realized for Tl9LaTe6 at 600 K. The isostructural series Tl9Sb1–xTe6, Tl9–xSb1+xTe6, Tl9Bi1–xTe6 and Tl9–xBi1+xTe6, with x ranging from 0 to 0.05, were prepared from the elements in the stoichiometric ratios, and the thermoelectric properties determined. In theory, these tellurides are narrow gap semiconductors when x = 0, with all elements in common oxidation states, according to (Tl+)9(Sb3+/Bi3+)(Te2–)6. The as-prepared samples of this 9-1-6 stoichiometry however exhibited relatively high electrical conductivity, which decreased with increasing temperature, indicative of the presence of extrinsic charge carriers. The Seebeck coefficient was generally above +100 μV K–1. Decreasing the Sb or Bi content then increased the hole concentration, and thus increased the electrical conductivity while decreasing the Seebeck coefficient. The best feature of these thermoelectrics was their low thermal conductivity, being consistently well below 0.7 W m–1K–1. Combined with reasonable electrical conductivity and high Seebeck coefficient, high zT values in excess of 1 can be achieved via simple hot-pressing as well, after experimental optimization of the carrier concentration via introducing deficiencies on the Bi site. Moreover, the variants with Sb instead of Bi exhibited similar thermoelectric performance, a result of the combination of a better electrical performance and higher thermal conductivity. To investigate the effects of Sn- and Pb-doping, several samples with the nominal composition Tl9Bi1–xSnxTe6, Tl9Bi1–yPbyTe6 (0 ≤ x, y ≤ 0.15), Tl9Sb1–mSnmTe6 and Tl9Sb1–nPbnTe6 (0 ≤ m, n ≤ 0.10) were investigated. Thermoelectric property measurements showed that increasing doping caused increases in electrical and thermal conductivity, while decreasing the Seebeck coefficient. Mixed results were obtained for the lattice thermal conductivity, which decreased in some cases, but increased in others. At around 500 K, competitive zT values were obtained for Tl9Bi0.95Sn0.05Te6, Tl9Bi0.95Pb0.05Te6, Tl9Sb0.97Sn0.03Te6, and Tl9Sb0.95Pb0.05Te6, namely 0.95, 0.94, 0.83 and 0.71, respectively. Higher dopant concentrations led to lower zT values. The 8-2-6 variants Tl4SnTe3 and Tl4PbTe3 were reported to attain a thermoelectric figure-of-merit zTmax = 0.74 and 0.71 at 673 K, respectively. Here, the thermoelectric properties of both materials are presented in dependence of x in Tl10–xSnxTe6 and Tl10–xPbxTe6, with x varying between 1.9 and 2.05, culminating in zTmax values in excess of 1.2. These materials are charge balanced when x = 2, according to (Tl+)8(Sn2+)2(Te2–)6 and (Tl+)8(Pb2+)2(Te2–)6 (or: (Tl+)4Pb2+(Te2–)3). Increasing x caused an increase in valence electrons, and thus a decrease in the dominating p-type charge carriers. Thusly, larger x values occurred with a smaller electrical conductivity and a larger Seebeck coefficient. In each case, the lattice thermal conductivity remained under 0.5 W m–1K–1, resulting in several samples attaining the desired zTmax > 1. The highest values thus far are exhibited by Tl8.05Sn1.95Te6 with zT = 1.26 and Tl8.10Pb1.90Te6 with zT = 1.46 around 685 K. These materials are very competitive compared to other leading bulk materials as well, including the n-type triple-filled skutterudite Ba0.08La0.05Yb0.04Co4Sb12, the p-type Zintl phase Yb13.6La0.4MnSb11 and p-type Tl0.02Pb0.98Te until 673 K.