DISCONNECT: Assessing and Managing the Social Effects of Development in the Athabasca Oil Sands 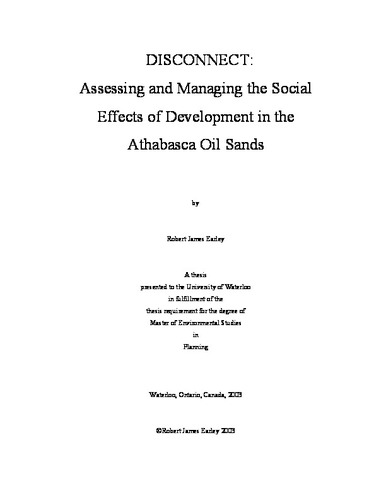 This research investigated the system by which the social effects of oil sands development on Fort McMurray, a city in northeastern Alberta, are assessed and managed. The research focused on Social Impact Assessment (SIA), Strategic Environmental Assessment (SEA), and the work of an industry initiative, the Regional Issues Working Group (RIWG). The oil sands industry, which involves large, labour-intensive mining and drilling operations in a boom-bust cycle, places considerable pressure on Fort McMurray, a city of approximately 50,000 inhabitants and the only urban area within 350 km of the oil sands. The social effects experienced there include exorbitant housing prices, shortages in service industry labour, insufficient social services, at times, to assist individuals and families who can no longer cope with the difficult conditions in the area, and a variety of other negative effects. Sixteen key informant interviews were conducted with urban planners, municipal politicians, provincial employees, a spokesperson for one of the First Nations in the area, community NGOs, and oil sands industry representatives. Data from the interviews were combined with a literature review and a document analysis. A modified McKinsey 7S Integrated Management Framework was used as a structure for describing and analyzing the Social Effects Assessment and Management System (SEAMS) in Fort McMurray. The SEAMS was found to be weak in comparison to the needs of the community. Project-by-project assessment of oil sands development was found to downplay the cumulative nature of social effects. Furthermore, no legislation or regulation existed that demanded action based on the findings of SIA. As a result, mitigation and management of social effects was insufficient, often occurring only when it was directly in the interests of the oil sands industry. While government and industry have plans in place to resolve some of the negative social effects, their actions were criticized by informants as being uncoordinated, inconsistent and often ineffective. The findings indicate that a strategy for exploiting Alberta's oil sands is necessary. The project-by-project evaluation of oil sands development proposals is not addressing the important long-term and regional social issues that arise as a result of construction and operation of the mines and facilities. A tool recommended for incorporating resolutions to long-term, regional social effects into the development plan is SEA with an explicit Strategic Social Assessment component. This strategic assessment and planning process should be undertaken by a publicly-accountable government body empowered to rationalize the pace of oil sands development based on social, environmental and economic effects, and to coordinate long-term responses by government and industry.