Is Social Capital Mediating the Relationship Between Ethnicity and Health in Canada? 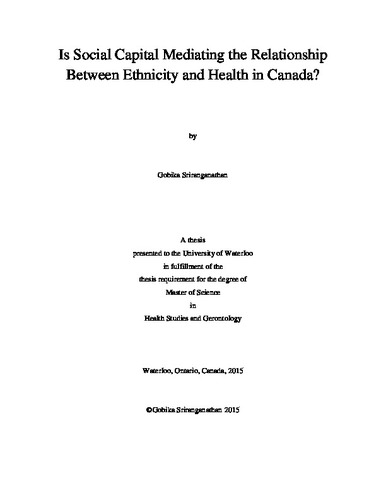 Ethnic minorities in Canada experience poorer health compared to their Canadian counterparts, on several important health outcomes. This study examines whether social capital – measured by social networks, civic engagement and trust – may offer an explanation for the continued persistence of these health inequities. Bivariate and logistic regression analysis was performed using the 2008 General Social Survey to investigate whether ethnicity and/or social capital are associated with self-reported health and if social capital is mediating the relationship between ethnicity and health. The study found that ethnicity was significantly associated with self-reported health with respondents identifying as South Asian, Aboriginal or Chinese, being significantly more likely to report poorer health compared to other Canadians. Furthermore, measures of civic engagement and generalized trust were positively and significantly associated with health. Although this study was unable to conclude that social capital is mediating the relationship between ethnicity and health, it explored the operationalization of social capital measures that could have policy or program evaluation implications. Further research is needed to confirm the findings of this study.

Gobika Sriranganathan (2015). Is Social Capital Mediating the Relationship Between Ethnicity and Health in Canada?. UWSpace. http://hdl.handle.net/10012/10031