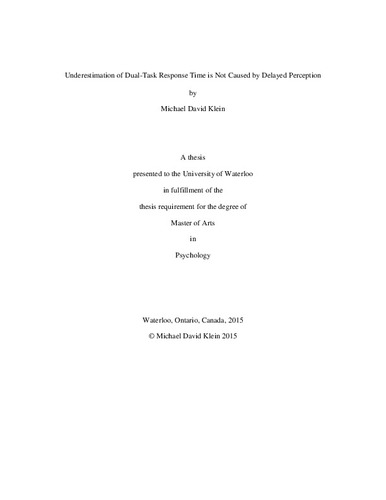 In the Psychological Refractory Period (PRP) paradigm, the stimuli for two separate tasks are presented in rapid succession. The stimulus onset asynchrony (SOA) is typically varied, resulting in slower responses to Task 2 for shorter SOA. This slowing is referred to as PRP interference. Previous results have suggested that introspective estimates of response time are not sensitive to PRP interference. That is, although response time to Task 2 is slowed substantially at shorter SOAs, estimates of this response time typically do not vary with SOA. One interpretation of these findings is that perception of the stimulus for Task 2 is delayed during processing of Task 1. Therefore, according to this interpretation, introspective response times (IRTs) are not sensitive to PRP interference because the second stimulus (S2) is not perceived while the interference is occurring. Across two experiments using different approaches, I found that IRTs are still not sensitive to PRP interference under conditions in which delayed perception of S2 is precluded. The lack of sensitivity is therefore not dependent on perception being delayed, and must have had some other cause in my experiments. My results are consistent with an existing account in which IRTs are based on the perceived difficulty of each trial rather than on mental timing. However, the results may be best explained by an account in which people simply are not very good at estimating durations while under cognitive load.