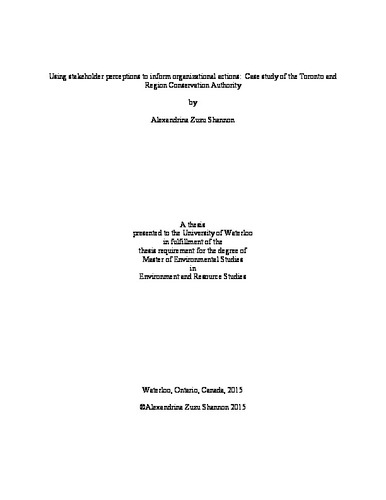 The Toronto and Region Conservation Authority (TRCA) has been primarily responsible for the management of watersheds in the Toronto region since the late 1950s. Guided by provincially mandated responsibilities, they have implemented regulation to prevent flooding of natural and human areas, acquired land holdings for the purposes of conservation, recreation, species protection and habitat renewal and acted as a regional governance structure to ensure the health of their watersheds – all while working closely with local municipalities, ENGOs, private sector and citizen groups. The TRCA’s watersheds are located in Canada’s most populated city and surrounding region, resulting in a complex system in which the watersheds are facing rapidly increasing population, urbanization and land use alongside the challenges of a globally changing climate. The TRCA has recently conducted studies that find the overall health of the Toronto region’s watersheds is declining, and the organization must now address this reality. The TRCA is primarily a conservation organization, but to address complex problems that are contributing to the declining health of watersheds, the TRCA believes it must broaden its mandate to include new sustainability-related goals. However, the TRCA is unsure of how their stakeholders perceive them, and how those perceptions might affect their organizational actions toward sustainability goals. For an organization that interacts with a diversity of stakeholder groups, the TRCA should be aware of these stakeholders’ perceptions of the organization and the impact they have on the TRCA’s strategic directions. This thesis intends to address the gap in the TRCA’s understanding of their stakeholders’ perceptions of their organization. Semi-structured interviews were completed with twenty-three of the TRCA’s important stakeholders. Analysis of the data was done through multiple iterations of coding the interview transcripts for emergent themes. The TRCA’s stakeholders are diverse, and this was reflected by the diversity of expectations that stakeholders have for the TRCA. Some expectations exist in opposition to each other, such as an equal amount of stakeholders who expect the TRCA to confine their role to their traditional mandate as stakeholders who expect the TRCA to orient their role around new sustainability directions. Stakeholders also attribute a high level of organizational legitimacy to the TRCA for their traditionally mandated responsibilities. This meant that many stakeholders were concerned about the TRCA taking on other responsibilities beyond their mandate. Generally, most stakeholders perceive the TRCA as an organization that supports other organizations in sustainability pursuits rather than taking the lead. This is reflected by analysis that shows the TRCA’s new strategic directions that do not reflect their traditional roles resonate weakly with stakeholders. Organizational legitimacy is a strength for the TRCA but it may hold the organization back if they attempt new directions. The TRCA should be aware of the concern among many stakeholders who feel the TRCA is taking on more than they should. This, combined with the finding that most stakeholders see the TRCA as a supporter of other organizations, could pose a challenge to the TRCA if they are trying to take a leadership role in new sustainability directions. The TRCA should continue to use a systems perspective to understand stakeholder perceptions, as stakeholders, especially in the TRCA’s context, can have an effect on their actions. If the TRCA is aware of the system dynamics affecting them, the organization will be able to make strategic decisions for implementing actions with the least resistance and the most support among stakeholders. The strength of assumed legitimacy that the TRCA holds, coupled with their reputation as a supporter of other organizations, could be a unique advantage to the TRCA for implementing actions that require coordination or cooperation with multiple stakeholders.