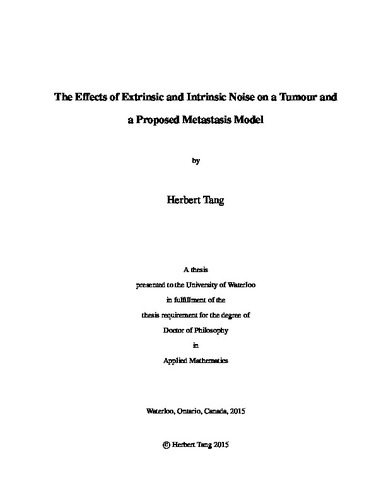 Cancer is a ubiquitous disease that afflicts millions of people worldwide and we will undoubtedly encounter it at some point in our lives, whether it be random strangers on the news, or someone much closer. As such, research into cancer (and cures for cancer) has been an intense area of focus. Malignant tumours show three main characteristics: 1) aggressive and uncontrolled growth, 2) invasion into surrounding tissue, and 3) the ability to leave the primary tumour site and invade another organ (metastasis). Mathematical models of these three aspects began in earnest about half a century ago, for example with Laird\cite{gompertz} in 1964 proposing that tumour growth was gompertzian. With the advent of the modern computer, complex partial differential equation (PDE) models of tumour growth which incorporate the other two features of malignant tumours have become accessible to the average researcher. Utilizing a mixture of both analytical and numerical methods, this thesis aims to add to the schema of cancer research by examining the effects of noise on a well established model of tumour growth, and a promising model for mitosis that we hope to eventually adapt to describe metastasis. The tumour model that we will examine is a single species reaction-diffusion model that captures the first two aspects of tumour growth. The reaction part determines how fast the tumour grows and the diffusion part describes how quickly the cancer cells spread within the domain. Adding noise to the model is a method of describing the disorder that is in a typical tumour, and allows us to determine error bounds on the tumour size and survival time, which gives us a sense of how accurate the estimates of those two quantities are. This method of estimating the uncertainty in survival time also allows us to further determine how modifications to the model (such as changing the diffusivity or adding chemotherapy) affects the error in the system. Our model of mitosis is an excitable system that admits a traveling wave as a possible solution. Mitosis is a process that occurs in a very spatially specific manner within the embryo and this model describes how a signal propagates from the centre of the embryo outwards. When we allow noise to perturb the system we will see that the model allows noise induced traveling waves in what would normally be a stable system in a deterministic setting. This means that the parameter range under which signalling can occur is relaxed and traveling waves occur more readily than expected. In terms of metastasis, where the tumour microenvironment is especially noisy and chaotic, that might explain why metastasis is so prevalent in malignant tumours. Adding noise to well established PDE models gives it an extra layer of fidelity that allows us to extract additional information from the model not available in the traditional deterministic setting. Using both a numerical and an analytical approach, this thesis develops and demonstrates general methods for estimating the uncertainty in the model outputs and also a method for calculating when a system might admit a noise induced instability in an otherwise stable system. More specifically, the error bounds in the estimates of tumour size and survival time in the tumour growth model may be of future use to doctors treating patients, and the noise induced effects of the mitosis model helps us to understand further how metastasis arises out of a developing tumour.

Herbert Hoi Chi Tang (2015). The Effects of Extrinsic and Intrinsic Noise on a Tumour and a Proposed Metastasis Model. UWSpace. http://hdl.handle.net/10012/10023