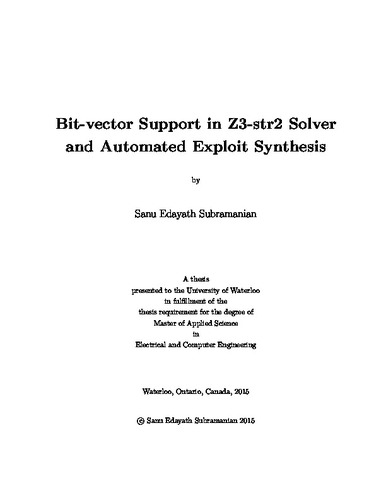 Improper string manipulations are an important cause of software defects, which make them a target for program analysis by hackers and developers alike. Symbolic execution based program analysis techniques that systematically explore paths through string-intensive programs require reasoning about string and bit-vector constraints cohesively. The current state of the art symbolic execution engines for programs written in C/C++ languages track constraints on a bit-level and use bit-vector solver to reason about the collected path constraints. However, string functions incur high-performance penalties and lead to path explosion in the symbolic execution engine. The current state of the art string solvers are written primarily for the analysis of web applications with underlying support for the theory of strings and integers, which limits their use in the analysis of low-level programs. Therefore, we designed a decision procedure for the theory of strings and bit-vectors in Z3-str2, a decision procedure for strings and integers, to efficiently solve word equations and length functions over bit-vectors. The new theory combination has a significant role in the detection of integer overflows and memory corruption vulnerabilities associated with string operations. In addition, we introduced a new search space pruning technique for string lengths based on a binary search approach, which enabled our decision procedure to solve constraints involving large strings. We evaluated our decision procedure on a set of real security vulnerabilities collected from Common Vulnerabilities and Exposures (CVE) database and compared the result against the Z3-str2 string-integer solver. The experiments show that our decision procedure is orders of magnitude faster than Z3-str2 string-integer. The techniques we developed have the potential to dramatically improve the efficiency of symbolic execution of string-intensive programs. In addition to designing and implementing a string bit-vector solver, we also addressed the problem of automated remote exploit construction. In this context, we introduce a practical approach for automating remote exploitation using information leakage vulnerability and show that current protection schemes against control-flow hijack attacks are not always very effective. To demonstrate the efficacy of our technique, we performed an over-the-network format string exploitation followed by a return-to-libc attack against a pre-forking concurrent server to gain remote access to a shell. Our attack managed to defeat various protections including ASLR, DEP, PIE, stack canary and RELRO.