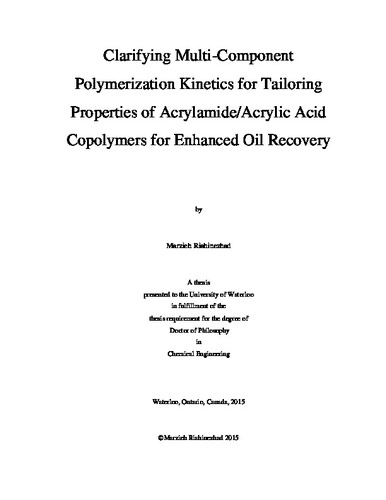 Among water-soluble polymers, copolymers of acrylamide (AAm) and acrylic acid (AAc) are probably the most common and widely used in practical applications. However, information on the kinetics of the AAm/AAc radical copolymerization is rather scarce. It is also clear, after reviewing the literature, that there is much debate about the details of reaction kinetics for this copolymerization. Reactivity ratios for AAm/AAc copolymerization system exhibit considerable scatter in the published literature, and therefore, there was a need for more definitive values for these reactivity ratios. An appropriate methodology, based on the error-in-variables-model (EVM) framework along with a direct numerical integration (DNI) of the copolymer composition model, was applied in order to determine reliable reactivity ratios. The reliability of the results was confirmed with extensive and independent replication. Furthermore, via an EVM-based criterion for the design of experiments using mechanistic models, optimal feed compositions were calculated, and from these optimal reactivity ratios were re-estimated for the first time based on information from the full conversion range. With respect to copolymerization kinetics, the polymerization medium is well known to play a significant role in terms of pH and ionic strength, because of the electrolyte nature of the monomers. The largely unstudied effect of ionic strength on monomer reactivity ratios and copolymerization rate was investigated in detail. Salt addition affects the nature of overall charges of the polyelectrolyte solution and diminishes the electrostatic repulsions between reacting radicals. It was found that changing the ionic strength of the solution by incorporating salts affected not only the point estimates for the monomer reactivity ratios, but also the overall behavior of the copolymerization with respect to chain composition (which, in its turn, affects other important application properties). Experimental observations confirmed the observed trends in reactivity ratios and were explained in detail, probably for the first time. A systematic study was also conducted to investigate and clarify the effect of polymerization recipe factors such as total monomer concentration, monomer feed fractions, and solution pH on copolymer microstructure. To study the effect of these factors, reliable reactivity ratios at constant ionic strength were estimated first. The trends in monomer conversion, copolymer composition, molecular weight, sequence length distribution and triad fractions were subsequently examined. Having a better understanding of kinetic profiles was needed in order to manipulate influential factors for tailoring AAm/AAc copolymer properties for the desired application. The shear viscosity of the copolymer solution is extremely important in determining the performance properties of AAm/AAc copolymers. A series of copolymers with selected properties were prepared to study the effect of polymer concentration, copolymer composition, and salinity on the shear viscosity of the copolymer solutions. The results revealed the considerable effect of solution concentration and salinity on shear viscosity. Moreover, the behavior of the copolymer composition showed a maximum with respect to shear viscosity. AAm/AAc copolymers are being used in a wide spectrum of applications, from which enhanced oil recovery (EOR) was the target application in this research study. This application was selected due to its continuously growing interest in both academia and industry for Canada. AAm/AAc copolymer application performance is tied to copolymer properties, which in turn are related to the kinetics of the copolymerization. Therefore, the prior systematic study of copolymerization kinetics and copolymer properties provided us with the required understanding of possible influential factors in both recipe and operation conditions. Based on this knowledge, tailor-made AAm/AAc copolymers with the specific desirable properties were designed for EOR applications. The copolymer performance was evaluated and compared with a commercially available copolymer of the same type. The results showed not only a noticeable improvement in the behavior of our tailor-made copolymers in improving mobility control and oil recovery efficiency, but also gave a perfect representation of how to go full circle from copolymerization kinetics (fundamental science) to the final desirable application properties (applied engineering phase).