Future climate change impacts on the boreal forest in northwestern Ontario. Implications for the forestry sector and the local community. 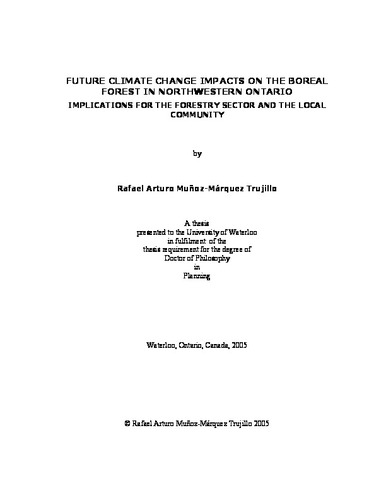 A large body of research has documented evidence of climate change impact already occurring on different systems on earth, future impacts can be expected. Accordingly, research is urgently needed to analyze the potential impacts of climate change on forest ecosystems in order to contribute to better landscape planning and management. This thesis investigates how climate change affects landscape change, and how to use this understanding in the analysis of land-use and landscape planning and management to adapt to climate change impacts. In particular, this study examines how climate change may impact a managed forest in terms of timber availability, and the regional community that relies on it for its survival. <br /><br /> I hypothesized that the Boreal forest in north western Ontario will change in the short term (i. e. 60 years) in species composition and will produce less available timber as a result of human-induced climate change as modeled by different General Circulation Models plus harvesting, compared to a baseline climate. The study objectives were (a) to evaluate the degree of change in land cover (species composition) under forest harvesting and various climate change scenarios; (b) to analyze timber availability under different climate change scenarios, and harvesting; (c) to describe possible scenarios of land cover change as a result of climate change impact and harvesting to assist in policy-making related to land-use and landscape planning; and (d) to identify possible sources of both land-use conflicts and synergies as a result of changes in landscape composition caused by climate change. <br /><br /> The study area was the Dog-River Matawin forest in north western Ontario (? 8 x 104 ha). It is currently under harvesting. I used the Boreal Forest Landscape Dynamic Simulator (BFOLDS) fire model to simulate landscape change under different climate change scenarios (CCSRNIES A21, CGCM2 A22), which were then compared to simulations under a baseline climate scenario (1961-1990). I also developed an algorithm for the geographic information systems Arc View©, that selected useful stands, and simulated harvesting and regeneration rules after logging, processes not currently included in BFOLDS. The studied period covered 60 years to analyze impacts in the medium term in the landscape change. <br /><br /> Results obtained were the following. (1) There will be a shortage in timber availability under all scenarios including the baseline. The impacts of climate change will cause a deficit in timber availability much earlier under a warmer scenario with respect to the baseline. The combined impact of climate change and harvesting could diminish timber availability up to 35% compared to the baseline by year 2040 under the CCSRNIES A21 scenario mainly due to an increase in fires. Deficits will occur 10 years before in the same scenario compared to the baseline (by year 2035). (2) In both scenarios and the baseline, there will be a younger forest. In 60 years, there will not be mature forest to support ecological, social and economic processes, as the forest will only have young stands. (3) Results obtained indicated that species composition will not change importantly among the scenarios of climate change and the baseline every decade, but there will be a change in dominance along the 60 years of the simulation under each scenario including the baseline. Softwood increased in dominance and hardwood decreased in all scenarios. <br /><br /> The period length used in the simulation of 60 years appeared to be too short to reveal conspicuous changes in species composition. Increases observed in softwood over hardwood related to the increase in fires which promoted the establishment of species such as jack pine as well as the application of regeneration rules after logging. This finding did not agree with the hypothesis. Results of timber availability were consistent with what I expected. Warmest climate change scenarios (CCSRNIES A21) impacted both the amount of timber available (less availability every ten years) from the beginning of the simulation and the time when deficits occurred. <br /><br /> There are important economic, social and environmental implications of the results of this study, namely a future forest that would be young and would supply much less timber. For the forestry industry, production goals would be hindered in the medium term, falling short of industry demands. For a society that depends heavily upon the forest to survive, declining production can imply unemployment, thus affecting the welfare of the community. For the environment, such a young, fragmented forest could be unable to sustain important key species and ecological processes, leading to a loss of biodiversity, Land-use and landscape planning should be used to regulate how the land is used to minimize climate change impact. They should be further used as adaptation tools, to help in ameliorate those climate change impacts that do occur.