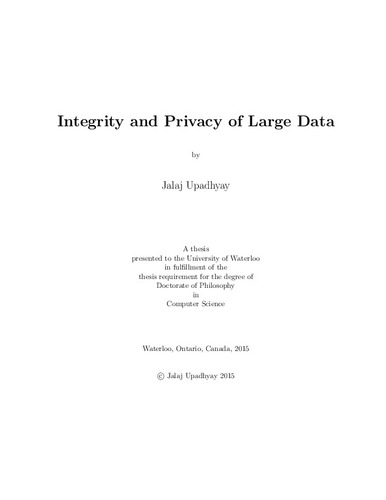 There has been considerable recent interest in "cloud storage" wherein a user asks a server to store a large file. One issue is whether the user can verify that the server is actually storing the file, and typically a challenge-response protocol is employed to convince the user that the file is indeed being stored correctly. The security of these schemes is phrased in terms of an extractor which will recover the file given any ``proving algorithm'' that has a sufficiently high success probability. This forms the basis of proof-of-retrievability (PoR) and proof-of-data-possession (PDP) systems. The contributions of this thesis in secure cloud storage are as below. 1. We provide a general analytical framework for various known PoR schemes that yields exact reductions that precisely quantify conditions for extraction to succeed as a function of the success probability of a proving algorithm. We apply this analysis to several archetypal schemes. In addition, we provide a new methodology for the analysis of keyed PoR schemes in an unconditionally secure setting, and use it to prove the security of a modified version of a scheme due to Shacham and Waters (ASIACRYPT, 2009) under a slightly restricted attack model, thus providing the first example of a keyed PoR scheme with unconditional security. We also show how classical statistical techniques can be used to evaluate whether the responses of the prover on the storage are accurate enough to permit successful extraction. Finally, we prove a new lower bound on the storage and communication complexity of PoR schemes. 2. We propose a new type of scheme that we term a proof-of-data-observability scheme. Our definition tries to capture the stronger requirement that the server must have an actual copy of M in its memory space while it executes the challenge-response protocol. We give some examples of schemes that satisfy this new security definition. As well, we analyze the efficiency and security of the protocols we present, and we prove some necessary conditions for the existence of these kinds of protocols. 3. We study secure storage on multiple servers. Our contribution in multiple-server PoR systems is twofold. We formalize security definitions for two possible scenarios: (i) when a threshold of servers succeed with high enough probability (worst-case) and (ii) when the average of the success probability of all the servers is above a threshold (average-case). Using coding theory, we show instances of protocols that are secure both in the average-case and the worst-case scenarios.