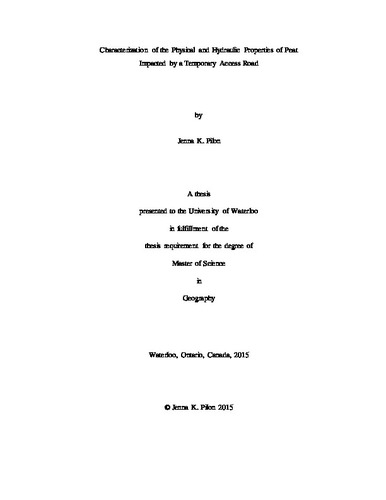 Due to the disruption of hydrology and water quality, permanent installation of roads and well pads is a practice that is discouraged. It is becoming more common to install temporary structures, which can subsequently be removed. However, little is known regarding the temporary or permanent hydrologic and biogeochemical impacts of temporary structures. In 2013, a temporary Access Road (at Pad 106) within the Firebag Fen in northeast Alberta was reclaimed to evaluate immediate and longer-term hydrologic and biogeochemical responses within the fen. Prior to its removal, the road hindered the natural water flow, and the restriction of runoff by the road led to vegetation mortality on the up-gradient (wet) side of the road. The long-term goal of the Suncor Firebag Road Removal Reclamation Project was to determine the capacity of the affected fen to naturally self-correct and self-regulate following road removal before intervention attempts. The specific objectives of this thesis are to: (1) compare peat physical characteristics and hydraulic conductivity in disturbed peat and undisturbed peat; and (2) determine the rate of change in water table and hydraulic gradients on both sides of the road immediately following road removal. Coring locations and groundwater well sites were located along transects running perpendicular to the road and, once the road was removed, on the peat that was underneath the road. Cores were collected for the determination of peat physical characteristics. Groundwater wells were installed for the determination of water table position and hydraulic gradients. Meteorologic conditions were monitored with a on-site station at the Firebag Fen site and showed variability between monitoring stations, and across the road, but consistently over time. Results indicate that the direction of flow was diagonal to the road. Heads decreased from the east (566.01 m.a.s.l mean) to the west (565.33 m.a.s.l mean) over 179 m and from Transect 1 (565.54 m.a.s.l mean) to Transect 4 (565.86 m.a.s.l mean) over 182 m. Median saturated hydraulic conductivity determined from laboratory measurments did not vary between the road and adjacent peatlands (10-3 – 10-2 m/s). Significant differences between the road and adjacent peatlands were not found for saturated hydraulic conductivity (p < 0.05). Porosity, bulk density, and specific yield varied significantly (p < 0.05) between peat on the east side of the road and the peat beneath the removed road. Porosity and bulk density also differed significantly between the east and west sides of the road (p < 0.05). Immediately following road removal, peat subsidence beneath the road was apparent. However, as the summer 2013 field season progressed, measured rates of peat subsidence began to slow 45 days post road removal, suggesting that the peat may have begun to rebound.

Jenna Pilon (2015). Characterization of the Physical and Hydraulic Properties of Peat Impacted by a Temporary Access Road. UWSpace. http://hdl.handle.net/10012/9811