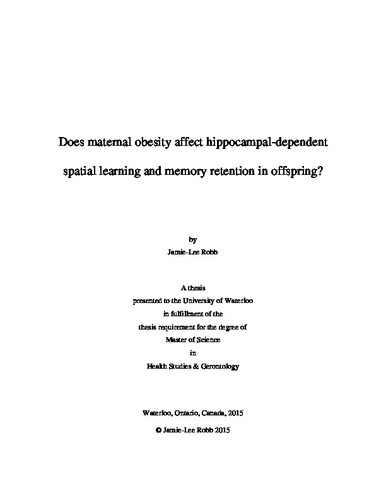 With a rise in the prevalence of obesity worldwide, behavioural, as well as physiological changes after consumption of a high-fat diet are becoming increasingly recognized. In addition to increased risk of chronic and degenerative diseases, obesity has also been linked with cognitive impairment, particularly in hippocampal-dependent behaviours such as spatial learning and memory retention. Maternal obesity is also becoming an issue across the globe, with an alarmingly high percentage of women of reproductive age who are either overweight, or obese. Past studies have not only revealed that early-life nutrition can impact brain development and subsequent behaviours across the lifespan, but also that exposure to a high-fat diet in utero may be particularly detrimental to susceptible structures such as the hippocampus. The present study hoped to elucidate the effects of a high-fat diet (45% kcal from fat) on spatial learning and memory retention in female Sprague-Dawley rats. Further, we examined whether maternal obesity could have intergenerational effects on spatial learning and memory retention in offspring. Although high-fat diet consumption was sufficient to induce obesity in the female animals, these dams did not demonstrate impaired spatial learning or memory retention in the Morris water maze task. Interestingly, in adolescence, male, but not female offspring of the obese dams were impaired in their performance on the Morris water maze task. However, the difference normalized by adulthood. Future research should aim to examine why females appear to be resilient to diet-induced cognitive impairment.