Driver Response to Rainfall on the Gardiner Expressway 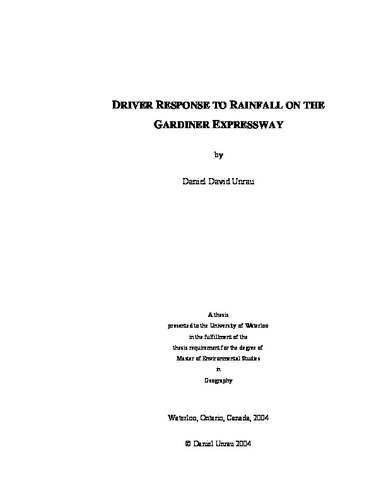 Adverse weather conditions can increase travel risk. Understanding how drivers react to adverse weather, such as rainfall, can aid in the understanding of road safety patterns and traffic operations. This information can in turn be used to improve driver education as well as highway operation through improved signing or the introduction of intelligent highway systems. Hourly rainfall data collected from the Pearson International Airport weather station and City of Toronto traffic data collected at the study site on the Gardiner expressway were used to create event and control pairs. In total, 115 hours with rainfall were matched to control data one week before or after the rainfall event. The traffic sensor at the study site collected speed, volume, and occupancy data at 20-second intervals, which was aggregated to five minutes. In addition, speed deviation and headway data at the 5-minute interval were used for analysis purposes. Two methods were used to test the effects of rainfall on traffic variables and the relationships between them. Matched pair t-tests were used to determine the magnitude of change between event and control conditions for the volume, speed, speed deviation, and headway variables for congested and uncongested traffic conditions. In addition, stepwise multiple linear regression was used to test the effects of rainfall on speed-volume and volume-occupancy relationships. Results of the matched pair t-tests indicated that volumes, speeds, and speed deviations dropped in event conditions, while headways increased slightly. Changes tended to be greater for congested than uncongested conditions. Linear regression results indicated that changes in speed were sensitive to volume conditions, and changes in volume were sensitive to occupancy, although only to a limited extent. Overall, drivers respond to rainfall conditions by reducing both speed and speed deviations, and increasing headway. Reductions in speed are larger in congested conditions, while increases in headway are smaller. Taken in combination, drivers are taking positive steps in order to either maintain or improve safety levels.