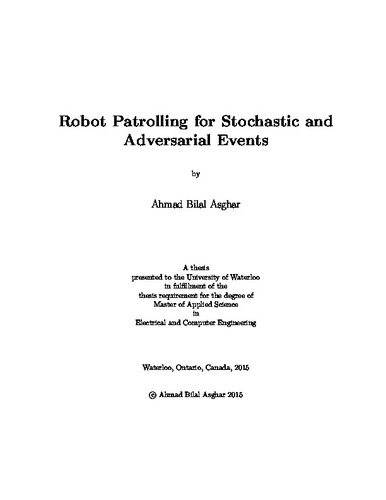 In this thesis, we present and analyze two robot patrolling problems. The first problem discusses stochastic patrolling strategies in adversarial environments where intruders use the information about a patrolling path to increase chances of successful attacks on the environment. We use Markov chains to design the random patrolling paths on graphs. We present four different intruder models, each of which use the information about patrolling paths in a different manner. We characterize the expected rewards for those intruder models as a function of the Markov chain that is being used for patrolling. We show that minimizing the reward functions is a non convex constrained optimization problem in general. We then discuss the application of different numerical optimization methods to minimize the expected reward for any given type of intruder and propose a pattern search algorithm to determine a locally optimal patrolling strategy. We also show that for a certain type of intruder, a deterministic patrolling policy given by the orienteering tour of the graph is the optimal patrolling strategy. The second problem that we define and analyze is the Event Detection and Confirmation Problem in which the events arrive randomly on the vertices of a graph and stay active for a random amount of time. The events that stay longer than a certain amount of time are defined to be true events. The monitoring robot can traverse the graph to detect newly arrived events and can revisit these events in order to classify them as true events. The goal is to maximize the number of true events that are correctly classified by the robot. We show that the off-line version of the problem is NP-hard. We then consider a simple patrolling policy based on the TSP tour of the graph and characterize the probability of correctly classifying a true event. We investigate the problem when multiple robots follow the same path, and show that the optimal spacing between the robots in that case can be non uniform.