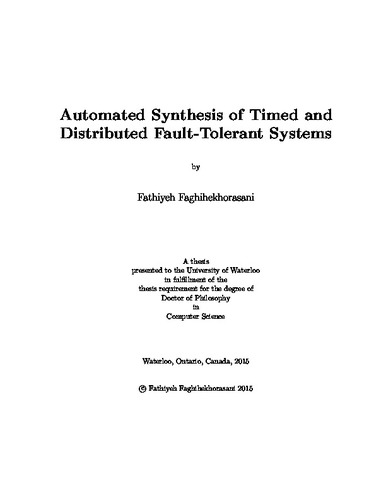 This dissertation concentrates on the problem of automated synthesis and repair of fault-tolerant systems. In particular, given the required specification of the system, our goal is to synthesize a fault-tolerant system, or repair an existing one. We study this problem for two classes of timed and distributed systems. In the context of timed systems, we focus on efficient synthesis of fault-tolerant timed models from their fault-intolerant version. Although the complexity of the synthesis problem is known to be polynomial time in the size of the time-abstract bisimulation of the input model, the state of the art lacked synthesis algorithms that can be efficiently implemented. This is in part due to the fact that synthesis is in general a challenging problem and its complexity is significantly magnified in the context of timed systems. We propose an algorithm that takes a timed automaton, a set of fault actions, and a set of safety and bounded-time response properties as input, and utilizes a space-efficient symbolic representation of the timed automaton (called the zone graph) to synthesize a fault-tolerant timed automaton as output. The output automaton satisfies strict phased recovery, where it is guaranteed that the output model behaves similarly to the input model in the absence of faults and in the presence of faults, fault recovery is achieved in two phases, each satisfying certain safety and timing constraints. In the context of distributed systems, we study the problem of synthesizing fault-tolerant systems from their intolerant versions, when the number of processes is unknown. To synthesize a distributed fault-tolerant protocol that works for systems with any number of processes, we use counter abstraction. Using this abstraction, we deal with a finite-state abstract model to do the synthesis. Applying our proposed algorithm, we successfully synthesized a fault-tolerant distributed agreement protocol in the presence of Byzantine fault. Although the synthesis problem is known to be NP-complete in the state space of the input protocol (due to partial observability of processes) in the non-parameterized setting, our parameterized algorithm manages to synthesize a solution for a complex problem such as Byzantine agreement within less than two minutes. A system may reach a bad state due to wrong initialization or fault occurrence. One of the well-known types of distributed fault-tolerant systems are self-stabilizing systems. These are the systems that converge to their legitimate states starting from any state, and if no fault occurs, stay in legitimate states thereafter. We propose an automated sound and complete method to synthesize self-stabilizing systems starting from the desired topology and type of the system. Our proposed method is based on SMT-solving, where the desired specification of the system is formulated as SMT constraints. We used the Alloy solver to implement our method, and successfully synthesized some of the well-known self-stabilizing algorithms. We extend our method to support a type of stabilizing algorithm called ideal-stabilization, and also the case when the set of legitimate states is not explicitly known. Quantitative metrics such as recovery time are crucial in self-stabilizing systems when used in practice (such as in networking applications). One of these metrics is the average recovery time. Our automated method for synthesizing self-stabilizing systems generate some solution that respects the desired system specification, but it does not take into account any quantitative metrics. We study the problem of repairing self-stabilizing systems (where only removal of transitions is allowed) to satisfy quantitative limitations. The metric under study is average recovery time, which characterizes the performance of stabilizing programs. We show that the repair problem is NP-complete in the state space of the given system.