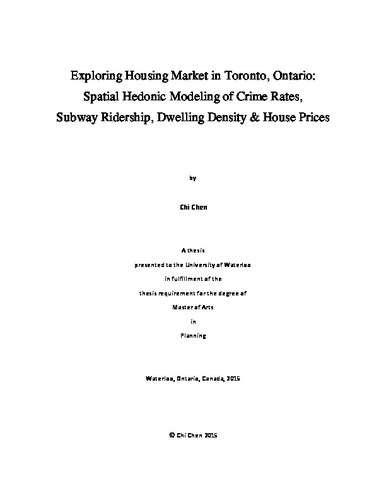 This thesis explores house prices and its relationship to neighborhood characteristics in Toronto, Ontario. In particular, by applying spatial hedonic models at the census tract level, this study examines the association between house prices and three neighborhood characteristics: crime rates, subway ridership and dwelling density. House prices were first explored by cluster analysis at multiple listing service (MLS) district level and results showed a significant spatial clustering of the prices in Toronto. Spatial hedonic models were then conducted on census tract level to examine the role of neighborhood characteristics in explaining the spatial patterns. The spatial mode was applied both across the entire city and separately in three neighborhoods divided by income level. Findings indicate that on the citywide scale, crime rates and dwelling density do not significantly influence house prices, but subway ridership was positively associated with house prices. In the middle-income neighborhood, six types of crime were found to significantly decrease house prices. Densities of all types of dwelling were found to be positively associated with house prices while apartment density decreases house prices in the middle-income neighborhood. Findings from this research can be applied to inform housing and transportation policies, regarding neighborhood improvement, housing affordability and smart growth.