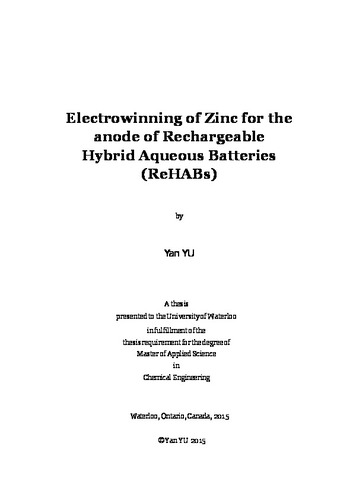 A rechargeable hybrid aqueous battery (ReHAB) system has recently been developed by our research group. In order to improve the anode material, electrowinning technique has been introduced to produce four different types of Zn anodes with various combinations of additives Bi, In, thiourea and gelatin (labeled as BG#1, TG#1, ITG#1 and hBITG#1). The resulting Zn anodes have been fully characterized for their electrochemical and battery performance. The results have been compared with commercial Zn. X-ray diffraction (XRD) pattern results indicate that during the electrowinning Zn has been deposited preferably along certain crystal directions. From scanning electron microscopy (SEM) images on relatively low magnification, commercial Zn foil shows cutting marks which might be caused by the cutting process with the manufacturer. While all anodes prepared by the electrowinning show relatively uniform surfaces. On relatively higher magnifications, the morphology of BG#1 is flat hexagonal & non-porous, TG#1 is fine-grained & porous, ITG#1 has relatively medium grain size & porous, and hBITG#1 is coarse-grained & porous. All anodes exhibit similar corrosion potentials and TG#1 performs the lowest corrosion current at 723.824 µA (per 1.1 cm2), follow by ITG#1, commercial Zn, BG#1 and hBITG#1. It means that the anode TG#1 possesses the best corrosion resistance. After 200 cycles for CC-CV protocol, batteries using commercial Zn anodes had capacity retention of 78.2%, yet batteries with BG#1, TG#1, ITG#1 and hBITG#1 anodes had 82.6%, 84.3%, 75.0%, and 71.9% capacity retention, respectively. While after 300 cycles, batteries with BG#1, TG#1, ITG#1 and hBITG#1 anodes had 73.2%, 77.2%, 66.2%, and 59.8% capacity retention respectively, yet batteries using commercial Zn anodes were all dead between 220-270 cycles. The results indicate that the TG#1 is the best choice for preparing anode material for the ReHAB. And all electrowinning Zn anodes are relatively stable compare to commercial Zn. The polarization resistances of batteries measured by electrochemical impedance spectroscopy (EIS) for all kinds of Zn anodes after cycles didn’t have exactly the same trend. The battery with the BG#1 anode has smallest polarization resistance which means it consumes the minimum energy during charge-discharge process, followed by the hBITG#1, the commercial Zn, the ITG#1 and the TG#1. At room temperature (25 ℃), float charge current of commercial Zn and hBITG#1 at 2.1V have largest values meaning more side reactions happening in the batteries, followed by TG#1, BG#1 and ITG#1. At high temperature (60 ℃), the trend was the same. Elemental analysis results indicate that batteries with BG#1 anode has the most carbon on cathode material after both room temperature float charge (RTFC) and high temperature float charge (HTFC) tests. This suggests those with BG#1 anode are the most stable on cathode material with least structure collapse during float charge processes, followed by hBITG#1, TG#1, ITG#1 and commercial Zn. Both BG#1 and TG#1 anodes show good overall performance. The advantages on battery performance of BG#1 anodes could be attributed to the uniform deposits, preferable crystal orientations and high corrosion resistance, and which of TG#1 anodes could be attributed to the porous and fine-grained deposits, preferable crystal orientations and high corrosion resistance.