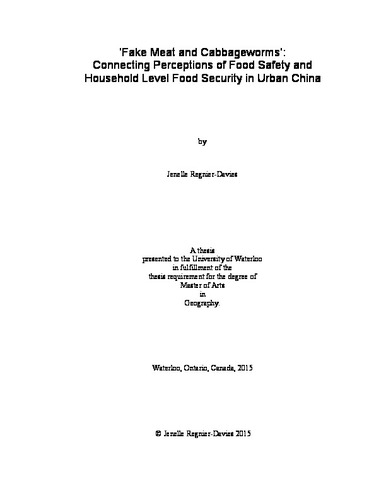 Food security emerged as a term in 1974, and was developed by the United Nations Food and Agriculture Organization as a strategy to ensure the volume and stability of the global food supply. Since 1974, the internationally recognized definition has evolved to be much broader in scope, and to include facets such as food safety and nutrition, as well as social and cultural preferences. Despite this comprehensive definition, food security as conceived by the Chinese government appears to be much more narrow. Further, in academic literature by Chinese scholars, food security has largely been framed as an issue of regional poverty. However, with the unparalleled migration of rural people to urban areas, the understandings of rural versus urban poverty will become increasingly blurred. Yet, very little research examines urban food security in China. To address these gaps, the objectives of this exploratory research are threefold: (1) to determine how the Chinese government understands ‘food security,’ in terms of scale and breadth, and to assess the implications of this (2) to identify urban residents’ perceptions around threats to their food security; and (3) to determine how urban residents respond to and cope with these perceived threats. This study is based on a review of literature combined with a case study in Nanjing, China, that involved a survey of 214 city residents, plus 36 interviews with urban residents, neighbourhood committee managers and wholesale market managers. This research found that despite shifting diets and food safety concerns among Chinese consumers, food security is largely conceived of by the Chinese government in terms of grain supplies, as a means to satisfy the food needs of its growing population. This framing of food security focuses on national level grain supplies at the expense of household level experiences of food insecurity. In order for the food security needs of Chinese urban residents to be properly addressed, this research calls for a reconceptualization of food security by Chinese government agencies and researchers. The study also found that unsafe food and fluctuating food costs were the most prominent threats to food security among urban residents. The elderly, low income people, and small food businesses were most affected by fluctuating food costs, while food safety concerns were widespread among all income levels. In response to these concerns, urban residents have developed methods of food procurement and food preparation to address to food safety threats. These findings underscore how food security is much more dynamic and complex than current understandings of the term among both Chinese government agencies and academic researchers.