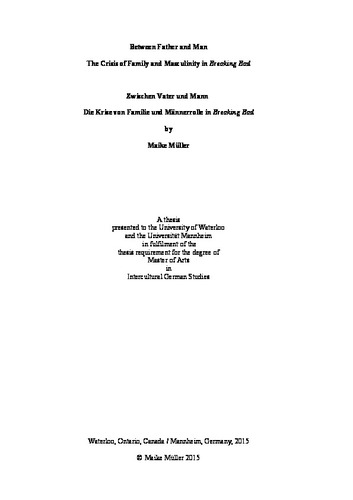 In my thesis I examine the crisis of masculinity and family in AMC’s TV series Breaking Bad. In prior research, the protagonist Walter White has been analyzed as a man who wants to escape his responsibilities and the disappointments of his family life. However, in this thesis he will be shown to be simultaneously an advocate for the idealized family as well as for the idealized role of a man. The crisis of the masculinity therefore originates in the incoherency of the new idealized role of father and the idealized role of the man. Following the introduction and the research overview, the first chapter of this thesis is about the family in Breaking Bad. Therefore, a detailed analysis of the conditions of the Whites’ family life and an examination of Walter White’s dissatisfaction with these structures will be given. For this purpose the theories regarding the idealized family, and the change thereof, from Stephanie Coontz, Robert Hettlage, and Christine Zimmermann will be employed. The second chapter will examine Walter White’s break-out from these conditions and how it impacts the family life of the Whites. To this effect, theories about masculinity and power by Heinrich Popitz and Christoph Kucklick will be used to describe and analyse Walter White’s role as a man and why idealized masculinity and the family structures cannot be combined. For the analysis I inquire different scenes from the whole series. I conclude that the crisis of the masculinity in Breaking Bad shows a mutual relation between family and role of the man. On the one hand, the crisis is released because of the non-existence of the idealized family and it therefore destroys the idea of the idealized role of the male. On the other hand, the pursuit of the role of the male destroys the family structures as a whole. Does the insecurity of the man in a time of changing roles turn out to create an “immoral gender”?