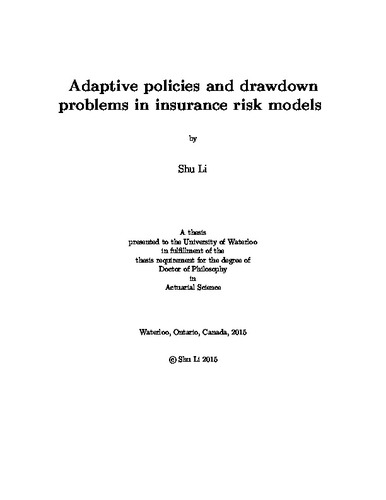 Ruin theory studies an insurer's solvency risk, and to quantify such a risk, a stochastic process is used to model the insurer's surplus process. In fact, research on ruin theory dates back to the pioneer works of Lundberg (1903) and Cramer (1930), where the classical compound Poisson risk model (also known as the Cramer-Lundberg model) was first introduced. The research was later extended to the Sparre Andersen risk model, the Markov arrival risk model, the Levy insurance risk model, and so on. However, in most analysis of the risk models, it is assumed that the premium rate per unit time is constant, which does not always reflect accurately the insurance environment. To better reflect the surplus cash flows of an insurance portfolio, there have been some studies (such as those related to dividend strategies and tax models) which allow the premium rate to take different values over time. Recently, Landriault et al. (2012) proposed the idea of an adaptive premium policy where the premium rate charged is based on the behaviour of the surplus process itself. Motivated by their model, the first part of the thesis focuses on risk models including certain adjustments to the premium rate to reflect the recent claim experience. In Chapter 2, we generalize the Gerber-Shiu analysis of the adaptive premium policy model of Landriault et al. (2012). Chapter 3 proposes an experience-based premium policy under the compound Poisson dynamic, where the premium rate changes are based on the increment between successive random review times. In Chapter 4, we examine a drawdown-based regime-switching Levy insurance model, where the drawdown process is used to model an insurer's level of financial distress over time, and to trigger regime-switching (or premium changes). Similarly to ruin problems which examine the first passage time of the risk process below a threshold level, drawdown problems relate to the first time that a drop in value from a historical peak exceeds a certain level (or equivalently the first passage time of the reflected process above a certain level). As such, drawdowns are fundamentally relevant from the viewpoint of risk management as they are known to be useful to detect, measure and manage extreme risks. They have various applications in many research areas, for instance, mathematical finance, applied probability and statistics. Among the common insurance surplus processes in ruin theory, drawdown episodes have been extensively studied in the class of spectrally negative Levy processes, or more recently, its Markov additive generalization. However, far less attention has been paid to the Sparre Andersen risk model, where the claim arrival process is modelled by a renewal process. The difficulty lies in the fact that such a process does not possess the strong Markov property. Therefore, in the second part of the thesis (Chapter 5), we extend the two-sided exit and drawdown analyses to a renewal risk process. In conclusion, the general focus of this thesis is to derive and analyze ruin-related and drawdown-related quantities in insurance risk models with adaptive policies, and assess their risk management impacts. Chapter 6 ends the thesis by some concluding remarks and directions for future research.