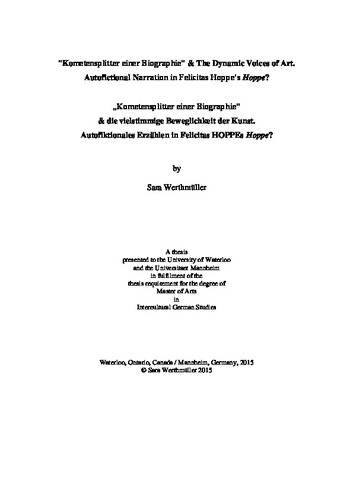 In this thesis I examine in how far, or to which degree, the concept of autofiction can be applied to Felicitas Hoppe’s text Hoppe (2012). Since the coinage of the term ‘autofiction’ by Serge Doubrovsky in the 1970s, there have been many discussions and redefinitions of this possible genre. The discussions include questions regarding definitions of autobiography and the novel within the field of literary theory, as well as the depiction of fact and fiction. Moreover, they ask in how far the knowledge of the impossibility of capturing ‘reality’ via language technically turns any autobiography into autofiction. Various positions regarding these debates, including the thoughts and positions of scholars such as Philippe Lejeune, Serge Doubrovsky, Martina Wagner- Egelhaaf, and Frank Zipfel, are represented in the first part of this thesis. In the sections that follow, I show how Felicitas Hoppe’s Hoppe is a text that intertwines ‘factuality’ and ‘fiction’ in a way that it can be interpreted as either or indeed simultaneously both genres (doppeltes Leseangebot) in the sense of Frank Zipfel. I point out that from the paratextual features of Hoppe to the tripartite fission of ‘Hoppe’ – including the author HOPPE, the narrator ‘fh’, and the protagonist Felicitas Hoppe – the text allows and asks with its particular construction for new interpretations of identity and self-representation. Finally, I conclude with the assumption that Hoppe is a text that might not be completely captured with present available literary theories. However, the refusal of the text to being fully assigned to any one particular genre or typology remains one of the many strengths of Felicitas Hoppe’s Hoppe.