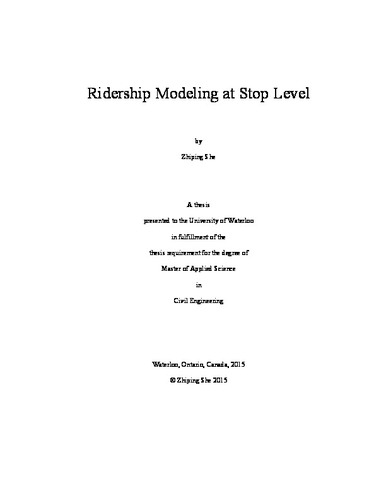 This thesis presents a ridership modeling method at stop level for public transit using multiple linear regression and Geographic Information System (GIS) analysis tools. This modeling method is applied to one express and one conventional bus route to guide ridership modeling in Waterloo Region. In the developed prediction model, the Dependent Variable (DV) is ridership, while the key Independent Variables (IVs) that affect ridership are: population within stop-based buffer (IV1); number of feeder buses that arrive at each stop (IV2); riders from other origins along the bus route (IV3). In this research, IV1 is extracted from the population data of 2011 Statistics Canada. IV2 is derived from the transit database of Waterloo Region. Finally, IV3 is computed from employment and student data of 2011 Statistics Canada, the Disaggregate Employment Trip Attracting Indices are introduced in IV3 data extraction due to the different trip-attracting strength of the different employment types at each stop. The comprehensive methods are applied in the extraction of those IVs, e.g. the effective service buffer area is decided for each stop by using simple linear regression method. Some close-by stops are combined to a segment level to avoid overlapping counting in buffering. Area-based Fraction Equation is used with combining Spatial Proximity and Weight Methods to improve the accuracy of data extraction. In regression processing, Trip Production (TP) / Trip Attraction (TA) matrices are created, confidence level of ridership is set up to 95%, stop and segment levels along one bus route, and direct and transfer boardings are combined to one prediction model for an accurate estimation. The Least Squares method is used to estimate the relationship between DV and the IVs and to find the coefficients for each bus route. The developed ridership prediction models are validated through regression results analysis; their accuracies are verified by comparing new observed data to the predicted ridership. The results prove that the prediction models are valid and reliable, and also show that the three regression coefficients for the express model have a significantly larger contribution to the ridership than those of the conventional bus route. Finally, the modeling method is also further validated by applying to different transit service periods such as morning peak, off-peak and afternoon peak hours. The output results are reliable and valid as well. This research provides a simple and surprisingly precise ridership modeling method. The computational complex and cost of data collection are greatly reduced in comparison to other approaches of ridership prediction. Yet the accuracies of the prediction models are significantly improved. It is expected that the method can be also used to quickly predict other transit routes, thus helping transit agencies plan new routes, evaluate existing transit routes, and manage transit system.