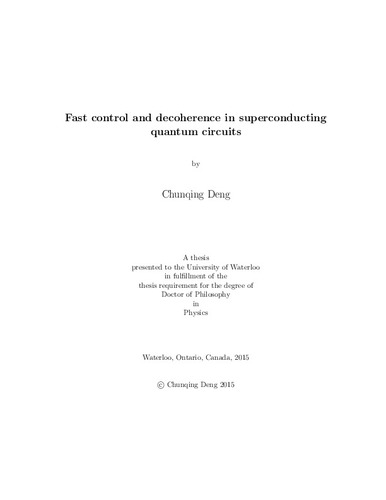 This thesis discusses a series of experimental and theoretical studies on fast control and decoherence in superconducting quantum circuits. These two subjects are complementary aspects of the problem of improving the gate fidelities in quantum information processing devices based on superconducting circuits. In the first part of this thesis, we present experiments on fast control of a superconducting flux qubit using strong driving. We explore driving with short pulses and a driving strength significantly exceeding the transition frequency. The observed dynamics is described in terms of quasienergies and quasienergy states, in agreement with Floquet theory. We observe the role of pulse shaping in the dynamics, as determined by non-adiabatic transitions between Floquet states. In addition, based on adiabatic perturbation theory in the Floquet picture, we propose a control scheme for fast and high-fidelity single-qubit operations with strong driving. These results pave the way to quantum control with a fidelity beyond the threshold of fault-tolerant quantum computation. In the second part of this thesis, we discuss experimental methods and present the characterization of decoherence in superconducting resonators and superconducting qubits. Firstly, we present an analysis method on the measurements of photon loss in superconducting resonators. We use this method to characterize the microwave loss of aluminum oxide, an important material in superconducting circuits. The power and temperature dependence of the measured loss is consistent with loss due to two-level defects in amorphous materials. Secondly, we present experimental results on decoherence and noise spectroscopy of a superconducting flux qubit. Using the qubit as a noise spectrometer, we perform detailed measurements on the power spectral density of the flux noise in superconducting circuits over a wide range of frequencies, from 10^-3 to 10^8 Hz, and over a temperature range from 35 to 130 mK. We also present measurements of frequency and temperature dependence of the qubit energy relaxation.