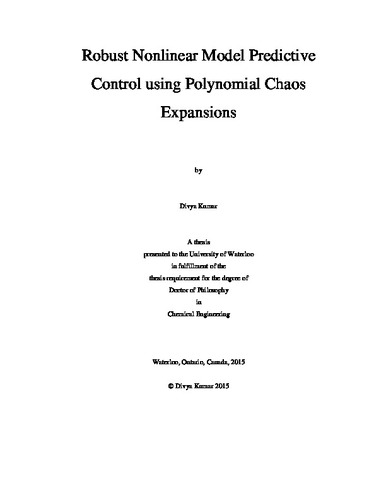 The performance of model predictive controllers (MPCs) is largely dependent on the accuracy of the model predictions as compared to the actual plant outputs. Irrespective of the model used, first-principles (FP) or empirical, plant-model mismatch is unavoidable. Consequently, model based controllers must be robust to mismatch between the model predictions and the actual process behavior. Controllers that are not robust may result in poor closed loop response and even instability. Model uncertainty can generally be formulated into two broader forms, parametric uncertainty and unstructured uncertainty. Most of the current robust nonlinear MPC have been based on FP-model where only robustness to bounded disturbances rather than parametric uncertainty has been addressed. Systematically accounting for parametric uncertainty in the robust design has been difficult in FP-models due to varying forms in which uncertain parameters occur in the models. To address parametric uncertainty robustness tests based on Structured Singular Value (SSV) and Linear Matrix Inequalities (LMI) have been proposed previously, however these algorithms tend to be conservative because they consider worst-case scenarios and they are also computationally expensive. For instance the SSV calculation is NP-hard and as a result it is not suitable for fast computations. This provides motivation to work on robust control algorithms addressing both parametric and unstructured uncertainty with fast computation times. To facilitate the design of robust controllers which can be computed fast, empirical models are used in which parametric uncertainty is propagated using Polynomial Chaos Expansion (PCE) of parameters. PCE assists in speeding up the computations by providing an analytical expression for the L^2-norm of model predictions while also eliminating the need to design for the worst-case scenario which results in conservatism. Another way of speeding up computations in MPC algorithms is by grouping subsets of available the inputs and outputs into subsystems and by controlling each of the subsystems by MPC controllers of lower dimensions. This latter approach, referred in the literature as Distributed MPC, has been tackled by different strategies involving different degrees of coordination between subsystems but it has not been studied in terms of robustness to model error. Based on the above considerations the current work investigates different robustness aspects of predictive control algorithms for nonlinear processes with special emphasis on the following three situations, i) a nonlinear predictive control based on a Volterra series model where the uncertain parameters are formulated as PCE’s, ii) The application of a PCE-based approach to control and optimization of bioreactors where the model is based on dynamic flux metabolic models, and iii) A Robust Distributed MPC with a robust estimator that is needed to account for the interactions between sub-systems in distributed control.