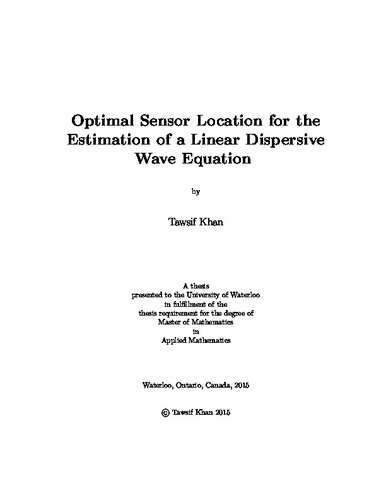 The problem of optimal sensor location for the estimation of a linear dispersive wave equation is considered in this work. A steady-state Kalman filter was used as an optimal state observer with localized velocity information as the measurement. Since the main model is a partial differential equation, the states evolve in infinite-dimensional spaces, and hence an approximation (finite representation) was required to design the observer. Three different approximation methods were compared - eigenfunctions and finite element methods using a linear and a high-order polynomial basis. The latter two methods are the more common choice of approximation schemes for systems with a complex geometry. It was found that the eigenfunctions perform much better as expected. The finite element methods require larger matrices to approximate the system with reasonable accuracy and hence calls for numerical methods to solve the Algebraic Riccati Equation efficiently. The optimal sensor location was considered for three different noise models - a localized noise, a more distributed nature of noise and finally an one-dimensional turbulence model. It was seen that the optimal location tend to be closer to the point where the physical shape of the noise reaches its maximum. Placing the sensor in the optimal location showed significant improvement in the estimation process.