On the Relationship between Sum-Product Networks and Bayesian Networks 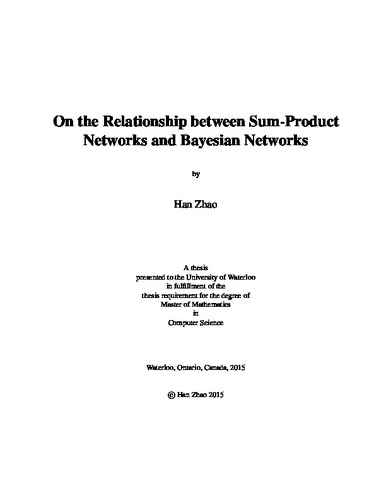 Sum-Product Networks (SPNs), which are probabilistic inference machines, have attracted a lot of interests in recent years. They have a wide range of applications, including but not limited to activity modeling, language modeling and speech modeling. Despite their practical applications and popularity, little research has been done in understanding what is the connection and difference between Sum-Product Networks and traditional graphical models, including Bayesian Networks (BNs) and Markov Networks (MNs). In this thesis, I establish some theoretical connections between Sum-Product Networks and Bayesian Networks. First, I prove that every SPN can be converted into a BN in linear time and space in terms of the network size. Second, I show that by applying the Variable Elimination algorithm (VE) to the generated BN, I can recover the original SPN. In the first direction, I use Algebraic Decision Diagrams (ADDs) to compactly represent the local conditional probability distributions at each node in the resulting BN by exploiting context-specific independence (CSI). The generated BN has a simple directed bipartite graphical structure. I establish the first connection between the depth of SPNs and the tree-width of the generated BNs, showing that the depth of SPNs is proportional to a lower bound of the tree-width of the BN. In the other direction, I show that by applying the Variable Elimination algorithm (VE) to the generated BN with ADD representations, I can recover the original SPN where the SPN can be viewed as a history record or caching of the VE inference process. To help state the proof clearly, I introduce the notion of {\em normal} SPN and present a theoretical analysis of the consistency and decomposability properties. I provide constructive algorithms to transform any given SPN into its normal form in time and space quadratic in the size of the SPN. Combining the above two directions gives us a deep understanding about the modeling power of SPNs and their inner working mechanism.

Han Zhao (2015). On the Relationship between Sum-Product Networks and Bayesian Networks. UWSpace. http://hdl.handle.net/10012/9416