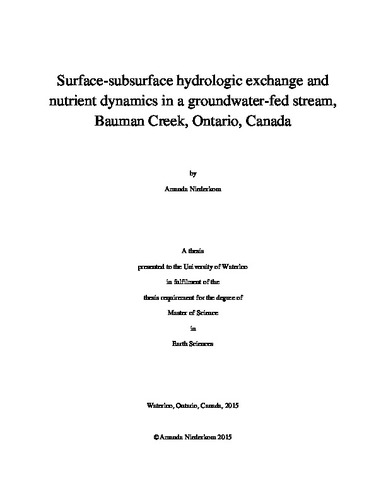 The stream-riparian-aquifer interface plays a major role in the regional flow of nutrients and contaminants due to a strong physical-chemical gradient that promotes the transformation, retention, elimination or release of biogenic elements. To better understand the effects of the near-stream zones on stream biogeochemistry, we conducted a field study on a small groundwater-fed stream located in the rare Charitable Research Reserve, Cambridge, Ontario, Canada. This study focused on monitoring the spatial distributions of nutrient elements in the riparian and hyporheic zones. Several piezometer nests were installed near stream to obtain data on the groundwater chemistry and sampled from May 2013 to May 2014. In addition to piezometer groundwater sampling, a series of passive (diffusion) water samplers, known as peepers, were installed along longitudinal and lateral transects centered on the stream during the Summer of 2013. Equilibrium time of peepers was determined in the laboratory to be ~28 days. The spatial and temporal variation in surface water and groundwater chemistry (carbon, nutrients) was observed between locations. Notably, groundwater upwelling along the stream resulted in distinctly different groundwater types and associated nitrate concentrations between small distances in the riparian zone (<4m). Notably, high concentrations of nitrate (13.5 mg l-1 NO3--N) were observed in deep groundwater and surface water. The flux of nitrate to the receiving Grand River ranged from 47 kg N d-1 in July and August to over 133 kg N d-1 in October. After the upstream source of the stream surface water concentrations of nutrients (nitrate, ammonium, sulfate and carbon) did not significantly change before the stream outlet. Although reduction of nitrate and sulphate were reported in the riparian zone of the stream, this did not significantly influence the chemistry of the adjacent stream water. Also, minimal retention in the hyporheic zones limited reduction of reactive compounds (NO3- and SO4-2) within the stream channel. This study suggests dissolved organic carbon (DOC) and residence time of water in the hyporheic zone and in surface water limited denitrification.