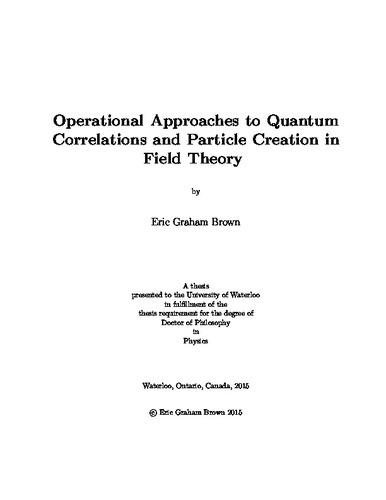 In this thesis we examine a variety of question regarding several quantum information-theoretic concepts as they manifest in the context of relativistic quantum fields. In particular, we study the qualitative and quantitative structure of entanglement (as well as more generalized quantum correlations) in field theory. Primarily we study the nature of vacuum entanglement, but consider spatial correlations in more general field states as well. We also discuss several novel aspects of particle creation phenomena, which generally go hand in hand with the presence of field entanglement. Such investigations are important from two perspectives. First, we gain enlightening new insight into the nature of quantum fields and, therefore, into the fundamental constituents of the matter contained in our universe. Second, we are able to consider the possibility of utilizing the relativistic nature of quantum fields as a resource for quantum technological tasks such as entanglement distribution, information processing, and metrology. As a general guiding principle, here we approach such questions from an operational perspective. That is, we focus less on the mathematical facts derivable from a given theory and instead attempt to answer in what concretely physical ways such facts manifest themselves. For example, in what ways can vacuum entanglement actually be experimentally detected and measured, at least in principle? Such an approach allows us to circumvent otherwise problematic interpretational issues. It also lends itself more naturally to the proposal of real world experiments regarding, and utilizations of, the physics being investigated. In this thesis we utilize two models of detection as applied to field theory. The first is one that we will develop from scratch and use to great effect in a number of studies; this is the non-perturbative oscillator detector. In this context, a ``detector" is simply some quantum system that is allowed to interact in some way with a quantum field. The response of this system then gives us information about the field properties. Typically such studies are done perturbatively, which presents several severe limitations on what may be investigated. We develop an alternative model, in which the detector is identified as a quantum harmonic oscillator, that allows non-perturbative solutions. We go on to apply this model to a variety of studies. We start by the examining the Unruh effect in a cavity setting. Not only are we able to examine the thermalization behavior of such a detector (which is stronger than what can be achieved perturbatively), we also demonstrate that the Unruh response is largely independent of the cavity boundary conditions, indicating a surprising amount of generality and universality to the phenomenon. We also consider the spacelike extraction of spatial entanglement by a set of such detectors. This includes the harvesting of genuine tripartite entanglement out of the vacuum, as well as the observation that the extractable quantum discord (a generalized measure of quantum correlations) can be greatly amplified by thermal fluctuations in the field, in opposite behavior to entanglement. This calls into question the nature of quantum discord, but also suggests at the possibility of actually using environmental noise as a quantum computational resource. Next, we use the oscillator detector model to great effect by proposing a method of reliably and sustainably generating and distributing entanglement via a cavity field. This protocol is inherently non-perturbative, and we refer to it as entanglement farming. Lastly, we modify the farming scenario to discover a very sensitive resonance effect that generates a large difference in the protocol output due to a minute change in system parameters, including the length of cavity being used. We put this forth as a potential method of quantum seismic metrology. The second model that we will consider simply involves performing projective measurements onto a given set of field modes. We will find, however, that such an approach allows us to solve previously intractable problems. In particular, we apply this procedure to the physically sensible choice of localized, positive frequency field modes. Using this model we perform two different studies. In the first, we consider the response of an observer accelerating not through the vacuum state but rather a thermal state. Such a setting has not been (properly) studied previously, due to the computational challenges involved. By applying the localized projective measurement model we are able determine that such an observer sees both an Unruh response from acceleration and a response from the field thermality and that, critically, these responses are distinguishable. We then go on to examine the degradation of quantum correlations between two observers due to the acceleration of one of the observers. This is a prototypical scenario of interest and, by applying realistic measurement assumptions, we obtain results qualitatively different from many previous works on the issue. In addition to these models, we question the nature of vacuum entanglement and particle creation by considering an operationally straightforward procedure that greatly demystifies these phenomena and puts them on to solid, physically concrete grounds. This operation is that of very quickly introducing a boundary condition onto one's field, for example by creating a mirror. The real particles generated in this process will then be quantum entangled with each other, even if they are created at spatially separate locations, and this entanglement derives exactly from the previously present vacuum entanglement. Not only does this realization provide an operationally satisfying interpretation of vacuum entanglement, it also suggests a straightforward procedure for its experimental verification. In all of this, the computational framework that we will rely upon is that of Gaussian quantum mechanics. This is a restriction of continuous variable quantum mechanics that, while limited in its applicability, provides extremely powerful computational tools in the cases that it may be used. The scenarios of interest in this thesis fall within this category and lend themselves naturally to a Gaussian approach. With this we are able to perform, near trivially, many otherwise intractable studies.