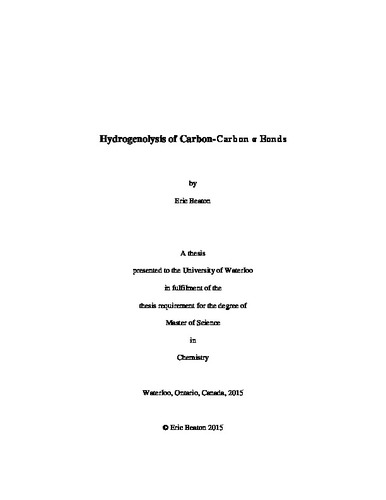 The modification of benzylic quaternary, tertiary, and secondary carbon centers through Pd-catalyzed hydrogenolysis of Csp3-Csp3 σ bonds is presented. When benzyl Meldrum’s acid derivatives bearing quaternary benzylic centers are treated under mild hydrogenolysis conditions—palladium on carbon and atmospheric pressure of hydrogen—aromatics substituted with tertiary benzylic centers and Meldrum’s acid are obtained with good to excellent yield. Analogously, substrates containing tertiary or secondary benzylic centers yield secondary or methyl derivatives, respectively. The scope of the reductive dealkylation reaction is explored and the limitations with respect to steric and electronic factors are determined. A mechanistic analysis of the reaction is described that consisted of deuterium labelling experiments and hydrogenolysis of enantioenriched derivatives. The investigation shows that the Csp3-Csp3 σ bond-cleaving events occur through an unprecedented mechanism, in which the palladium center displaces a carbon-based leaving group, namely Meldrum's acid, with inversion of configuration by a formal SN2 process, followed by reductive elimination of palladium to furnish a C-H bond.